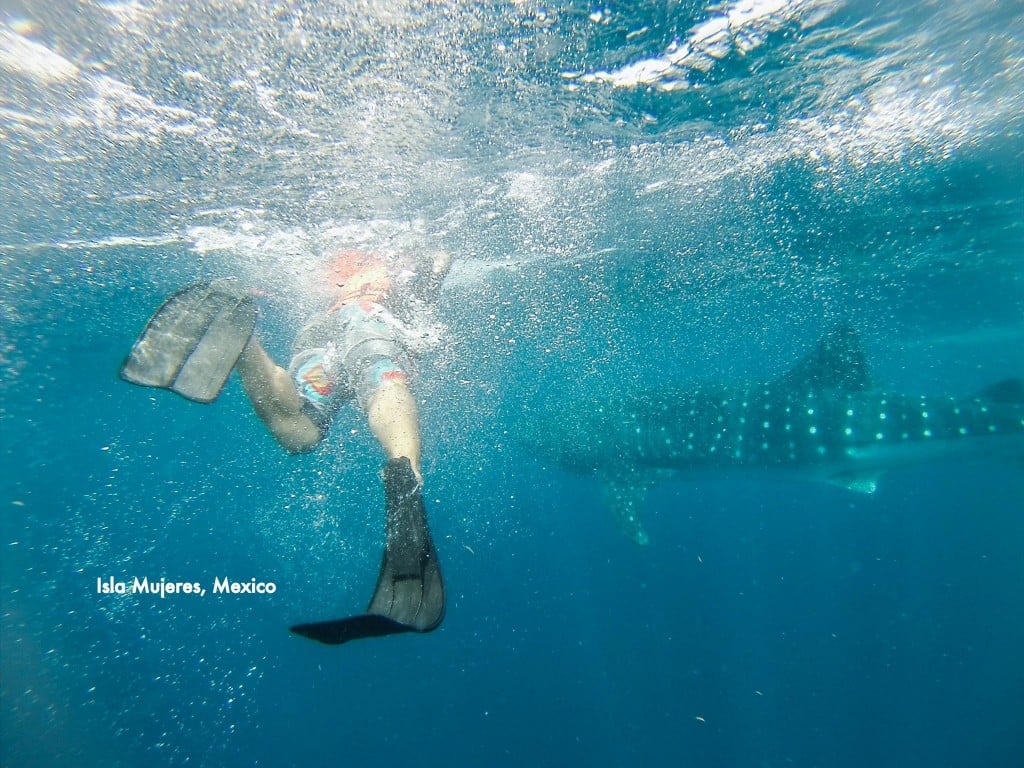 Yours Truly Swimming with Whale Sharks!

The sea was tossing and the horizon was blue in every direction.  Everybody aboard was sick, slightly green in color and occasionally rushing to the bathroom or the nearest rail.  70 other boats jockeyed for position, their wakes adding to the turmoil.  The boat captain started yelling in unintelligible Spanish, pointing aggressively towards us and the side of the boat in turn.  Seconds later, we were face to face with a 20 foot long shark

3 times longer than ourselves, they glide gracefully through the water, effortlessly advancing at a speed that was difficult to mimic for long.  Curious, several times they swam within an arms reach of us, as if to say hello to the strange creatures that have visited their world

END_OF_DOCUMENT_TOKEN_TO_BE_REPLACED

ADO has a night bus from Belize City to Cancun, Mexico, with stops along the way in Tulum and Playa Del Carmen.  Unfortunately information on this bus service is limited and (sometimes) contradictory.  Even the website that ADO publishes for information is a dead end.  (www.adobelize.com)

We asked several tour operators on Caye Caulker and received different information from each on departure times, cost, and duration of the trip.  The only thing they agreed on was that they couldn’t sell us tickets

Hopefully this post will help future travelers take advantage of this great trip option, while minimizing hassle and stress.

END_OF_DOCUMENT_TOKEN_TO_BE_REPLACED

A Sunny Day at The Split

Avoiding the numerous chocolate milk colored lakes in the middle of a road made of sand, we make slow progress towards the other side of town.  A few super sized Americans on golf carts spray tourists and distracted locals alike as they charge forward at full speed, oblivious to the unhappy faces and wet and dirty people left in their wake.  The mosquitoes are already out in force.  Daily rain has provided unlimited breeding grounds.  None of this matters though, we are on our way to our 3rd lobster dinner in as many days.

Lobster season opened a few weeks ago, and we’ve been stuffing ourselves with lobster omelets, lobster burritos, and grilled lobster.  Lobster, lobster, lobster.  It was available in anything and everything, and for ridiculously low prices.  It was cheaper than fish, cheaper than pork, and cheaper than chicken.  This is probably what heaven is like (although I’m certain heaven has lobster ice cream as well) END_OF_DOCUMENT_TOKEN_TO_BE_REPLACED