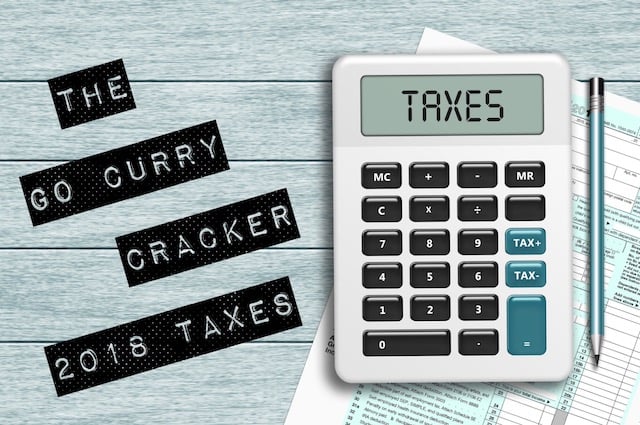 2018 is the first tax year under the Tax Cuts and Jobs Act, our 6th tax year as early retirees, and our 1st retirement year paying income taxes.

I guess it was good while it lasted… even if it was optional.

I heard I was supposed to be able to do our taxes on a postcard-sized form this year, which turned out to be untrue. The 2-page 1040 was replaced with a 1-page 1040 and 6 additional forms, which makes the total tax picture less clear at a simple glance.

As in previous years, we had multiple streams of income: Interest, Dividends, Capital Gains, and Business income. All told, this year income was $136,866 with an income tax burden of $1,187, which is an effective tax rate of 0.9%. We paid about $250 less in taxes than we would have without the TCJA. I guess I would still prefer a little actual reform with my tax reform. (My review of the TCJA here.)

We also paid $9,663 in Self-Employment taxes. (This could be eliminated through the use of an Overseas Corp, but since we will probably be moving back towards the US I’ve been content to accept a larger future SS income instead.)

Here are the details:

The Foreign Earned Income Exclusion allowed the exclusion of $57,775 of business income. Combined with the standard deduction, this reduced our taxable income to $46,548. 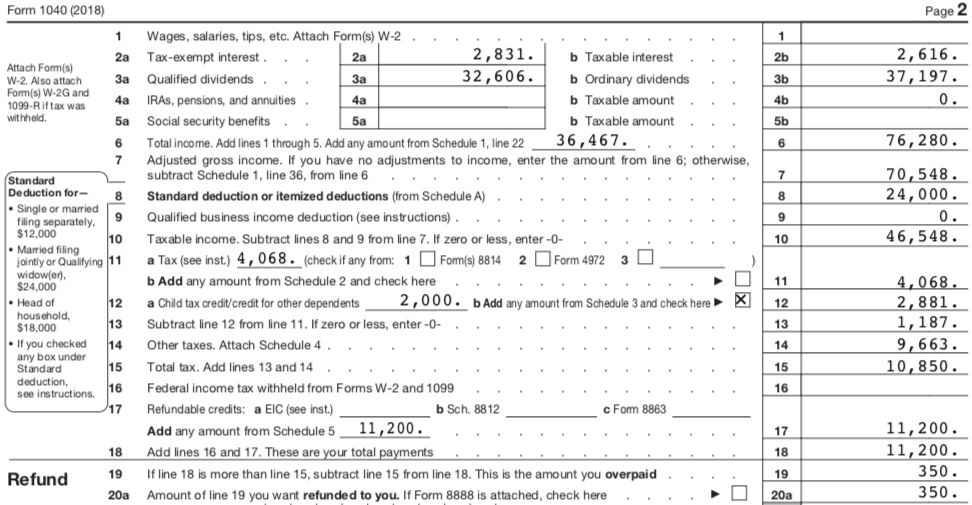 Through the FEIE, we are able to exclude our foreign earned income. We are outside the US for more than 330 days/year so we qualify via the objective pass/fail Physical Presence Test. (We probably also qualify via the subjective Bonafide Residence Test.)

Business revenue and expenses are classified as either US or Foreign sourced based on where we are physically located at the time the income is earned, so money earned while in the US cannot be excluded although the division of US/Foreign income/expenses is an exercise left to the reader. I published 51 blog posts in 2018, 4 of which were published while I was in the US, so I split everything with a ratio of 4/51 (7.8%.) Seems logical.

Any deductions that are directly related to Foreign Earned Income are also excluded – no double deductions. For our purposes, this is only the Deductible part of self-employment tax, which is determined on Schedule SE and reported on Line 27 of Schedule 1.

All of this info ends up on Form 2555, Foreign Earned Income, where the FEIE amounts to $57,775. When combined with the SE tax deduction, this eliminates taxes on 100% of foreign profit. The relevant portion is shown below.

We could also elect to use the FEIE for Winnie’s income, but choose to keep it as US taxed income and contribute to a Roth IRA since this has no impact on the amount of taxes we pay.

Determining tax burden is a process that generates a lot of questions every year, so let’s walk through it.

With the FEIE and the Standard Deduction, we have total Taxable Income of $46,548 (Line 10 of Form 1040.) Because we are claiming the FEIE and we have income from qualified dividends and long-term capital gains, we are asked in the instructions to use the Schedule D Tax Worksheet and the Foreign Earned Income Tax Worksheet. (Always read the instructions; TurboTax does this automagically.)

The Schedule D Tax Worksheet is really ugly looking, but what it does is separately determine tax on ordinary income and qualified dividend/long-term capital gain income. This process ignores the FEIE (for now.)

These numbers are then transferred to the Foreign Earned Income Tax Worksheet.

Here, the tax burden on the FEIE amount is specifically calculated on Line 5 (From the Tax Tables, the total tax on earned taxable income of $57,775 = $6,552.) This is how much tax the FEIE saves us this year!

This is then subtracted (excluded) from the tax burden calculated on the Schedule D Tax Worksheet to yield the actual tax burden of $4,068.
(Line 6 of Foreign Earned Income Tax Worksheet and Line 11 of Form 1040.)

Improvements and Other Options

This is our 2nd year using the FEIE, and I feel like I finally really understand it. As with anything, every step is a learning process and it is always possible to do better.

Here are some things I could have done differently:

With a few minor changes, I could have reduced our 2018 income tax burden to zero.

But the main reason is that I plan to realize a massive amount of capital gains in short order as preparation for returning to the US. In other words, I’ll be paying a whole bunch of tax at 15% sooner or later to avoid paying even more tax later. This year seems as good as any to start.

Rushing my laptop purchase might help maintain my zero taxes street cred, but all it is doing is shifting tax burden from 2018 to 2019. Instead, I’ll time my acquisitions to meet the minimum spend requirement on a new credit card. A few free plane tickets will provide greater value.

Whenever I pay SE taxes, we get a commensurate increase in our future SS income. Whenever Winnie pays SE taxes, it is a total loss (since she never worked in the US.) Formally paying Winnie for blog services this year (2018) would allow a small boost in the childcare tax credit… but what about next year (2019) when we don’t plan to be in the US at all? (so no US income for me and thus no eligibility for this credit.) In the end, generating some 1099s and so on seems like a lot of work just to save $379 one time.

As for contributing to Traditional accounts, if I saved 15% today… would I pay less than 15% on withdrawal? If we are in California and the ACA still exists, the answer is definitely No. So this is probably the lowest tax rate I will pay on IRA contributions/withdrawals in my lifetime. I’ll just pay 15% now, as perhaps our 401k is already too big.

There are a lot of great tax minimization tools available to the early retiree.

We also paid some SE taxes again this year ($9,663), which will increase our future SS income. It’s kind of an interest-free loan.

Overall, I’d say it was a good performance in the tax minimization game.

Reminder: if you are looking for assistance with your expat taxes, check out our tax resource page.