Advertiser Disclosure: This site is part of an affiliate sales network and receives compensation for sending traffic to partner sites, such as CardRatings.com. This compensation may impact how and where links appear on this site. This site does not include all financial companies or all available financial offers. Opinions, reviews, analyses & recommendations are the author’s alone, and have not been reviewed, endorsed or approved by any of these entities.

GCC: Welcome to the new Go Curry Cracker Award Travel series, featuring author and master travel hacker Brandon Chase. How to travel further/cheaper/more often/more luxuriously has been a much requested topic and it has finally arrived.

“Travel Hacking”, “Award Travel”, “The Hobby” – whatever you call it, the concept is the same: leveraging rewards programs to travel more frequently and luxuriously while paying less out of pocket.

In an age of dizzying advertisements and nonstop promotions from banks, hotels, and airlines all vying for your eyes and dollars it can be difficult to decipher the most advantageous programs to focus your attention on. However, if you are able to distill the overwhelming amount of noise down to useful and actionable strategies, the benefits can be incredible. I’m here to help you do that.

Jeremy has shown time and time again the perks of travel rewards, making it seem effortless as he and his family jet-sets to Europe for a summer or takes a free trip to Mexico. Indeed, once you have a solid base of travel points and an understanding of the various program intricacies, the world opens up in new and glorious ways. Suddenly, that first class trip to Asia or last-minute hotel room booked for a family member is not only feasible, but it’s no longer a hand-wringing and uncomfortable experience. A few clicks of the mouse and you’re on your way to the Maldives for less than the price of dinner for two. 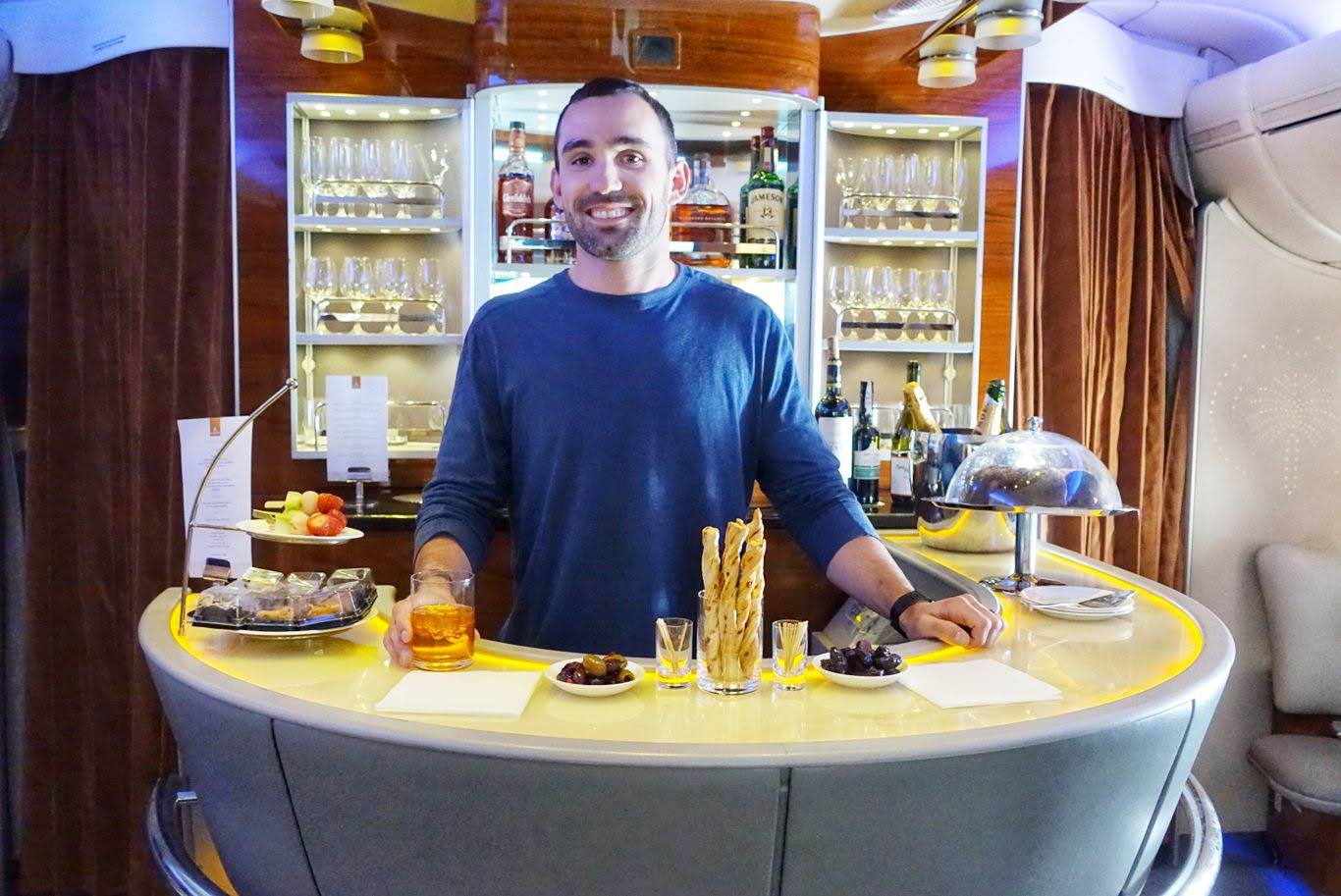 Brandon serving up highballs at 36,000 ft in the Emirates sky bar.

Understand, however, that it’s not all champagne and caviar (although often it is) and that pitfalls do exist. Unused frequent flier miles can expire, rendering them useless, or taxes, surcharges, and annual fees may eat into your value. At the very least, you could be sitting on a pile of points but confused about how to redeem them for maximum value.

All of that said, you are reading this because you want to optimize benefits, minimize costs, and overcome obstacles intentionally placed by the award programs in order to maximize experience, and it absolutely can be done. In a series of articles, we’ll attempt to bridge this gap and provide practicable steps to get you traveling the world in style for pennies on the dollar.

At its core, award travel consists of two functions: collection and redemption, better known as “earning and burning”. “Earning” is the process of acquiring miles and points across various rewards programs for future use while “burning” is redeeming those currencies for flights, hotels, or experiences rather than spending cash.

A quick note on nomenclature when it comes to these programs: a “mile” typically refers to an airline frequent flier mile for a specific airline, whereas a “point” is generally tied to a specific hotel chain or bank. A transferable currency is a type of reward that can be transformed into a frequent flier mile or a hotel point for programs that the specific bank has a relationship with. For example, a Chase Ultimate Rewards point can become a United frequent flyer mile or a Hyatt Hotels point (among others). It’s a bit confusing at first, since terms like point and mile are often used interchangeably. This will be explained in more detail below, but for now just realize that not all rewards currencies are created equal nor can they be freely transferred between programs.

Credit cards are by far the fastest, easiest, and most effective method of earning large amounts of miles and points. Many banks offer credit cards which provide 50,000-100,000 points or miles once you complete a minimum spending threshold of $3,000-$5,000 in a specified time period (usually 90-120 days after opening the card).

The Chase Sapphire Preferred is the best card for beginning travel hackers!

For our purposes, the most easily understood version of the credit card is one which directly earns airline frequent flyer miles or hotel points, such as the United Airlines credit card from Chase or the Hilton Honors Surpass card from American Express. These credit cards earn one or more airline miles or hotel points per dollar charged to the card and the points are deposited into your airline or hotel award account on a monthly basis. Those points can then be used to book award flights or free nights with the airline or hotel and any of their partners.

In addition to miles and points earned for specific airline or hotel programs, there are also credit cards which earn “transferable” points currencies such as Chase Ultimate Rewards (UR), American Express Membership Rewards (MR), Citi Thank You Points (TYP), and Capital One Venture Miles (CapOne). These currencies, while sometimes redeemable directly for travel as mentioned below, can be transferred into airline miles at a 1:1 rate based on the bank’s relationships (with the exception of Capital One, whose ratios are less favorable). For example, URs can be transferred to any of their 10 partner airlines including United Airlines, British Airways, and JetBlue. Depending on the currency, these points can also be transferred to some hotel programs but are generally a poor value.

Finally, there are credit cards that earn fixed-value points such as US Bank FlexPerks, Barclay Arrival Miles, and Capital One Venture Miles (CapOne miles can both be transferred to airlines and also redeemed as fixed-value points). The points from these programs are sometimes, confusingly, referred to as “miles” although they are not airline miles as described above. Instead, they are generally redeemable at a 1-2 cent per point fixed rate through the bank’s own travel portal or used to reimburse yourself against charges for travel-related expenses on your statement.

Miles, points, and transferable currencies. Confusing at first, but makes sense once you learn it.

Although credit cards will be the cornerstone of earning points and miles, there are multiple ways to top off your balances, including:

We’ll detail more information on these topics in future articles, but for now just know that credit cards are the best option for quickly amassing points (and, no, it won’t hurt your credit to open multiple cards). With some practice, patience, and time, the act of earning miles and points will become second nature. Before you know it, you’ll be diving across the table to ensure you earn points on the group lunch while also paying for entire household renovations with gift cards.

While optimizing your spending to earn insane amounts of rewards is fun on its own, the real magic happens when you redeem those hard-earned points for luxury travel. However, this is also where things can get complicated. The banks, airlines, and hotels would love nothing more than for your points to sit safely in your account collecting dust while their expiration date looms.

It took some effort and creativity to earn your points, but redemption is where the award programs double-down on obfuscation – especially airlines. They intentionally make it difficult to extract value by increasing the number of miles required for flights, blocking award redemptions on certain routes, and misleading its customers into wasting their points on sub-optimal redemptions such as gift cards or iPads. If it ever crossed your mind to feel bad for leveraging the airlines’ programs, forget it: in 2016, American earned an estimated $2.1 billion from their AAdvantage program while providing award seats on barely more than half of their flights. Unfortunately, this is common across rewards programs and only getting worse.

The good news, though, is that new opportunities are continually cropping up and more information than ever before is available on the Internet to help you solve even the trickiest of questions as long as you know where to begin. In order to get to that point, you’ll need some familiarity with how redemptions work. There are four basic ways to redeem points and miles for travel:

The key takeaway is that redeeming airline miles for flights is the best way to get maximum value from your points, but it’s also the hardest concept to grasp because of the numerous rules and restrictions put in place by airlines. Using fixed-rate currencies, on the other hand, is easy to understand and perform but you limit your value. For example, you may be able to get 5 cents per point or more in value from a flight booked with frequent flyer miles whereas you’ll never get above the advertised rate of 1-2 cents per point for fixed-value redemptions. Therefore, it makes sense to prioritize your efforts in learning the intricacies of award flights if maximum value is your goal.

On its surface, travel hacking can seem too good to be true. Sign up for a few credit cards, put your spending on them, then fly first class to Europe this summer – what’s the catch? The catch is that it takes some learning, flexibility, and organization in order to obtain outsized value for your efforts. Once you have foundational knowledge of the various currency types, earning strategies, and redemption options, you are then able to lay out your credit card applications and spending in a way that aligns with your travel plans.

Travel hacking is an exciting, captivating, and valuable hobby but it’s not without its pitfalls. By understanding the basics of earning and burning, you are well on your way to thousands of dollars in free travel. Over the next few weeks, we plan to dig deeper into this topic to help you get the most out of your points and miles.

Which topics would you like to see covered in this series? What is most confusing about award travel for you?

Brandon Chase is a financially independent writer, endurance athlete, and travel hacking enthusiast originally from Maine. He is currently serving out the remainder of his final overseas tour as a Foreign Service Officer with the U.S. Department of State in Islamabad, Pakistan and has previously lived in Cairo, Egypt, and Nicosia, Cyprus. Since getting hooked on “the hobby” in 2013, he and his wife have accumulated and redeemed millions of points and miles for luxury travel, including a $35,000 trip around the world for 97% off retail which he wrote about on his blog Fit For Miles. In addition to travel, he loves to be outdoors and has summited Mr. Kilimanjaro, thru-hiked the Appalachian Trail, and completed ultramarathons at the 50k and 50-mile distances. Brandon is thrilled to share his knowledge of credit cards, award travel, and optimization with the Go Curry Cracker readers and hopes to help people travel more and better than they ever thought possible.

Top offers from our partners

Interested in getting the best and latest offers directly in your inbox? We stay on top of the best offerings so you don’t have to. Subscribe here.

Editorial Note – Opinions expressed here are author’s alone, not those of any bank, credit card issuer, hotel, airline, or other entity. This content has not been reviewed, approved or otherwise endorsed by any of the entities included within the post.