Is College Worth It? (With Future Tuition Predictions) 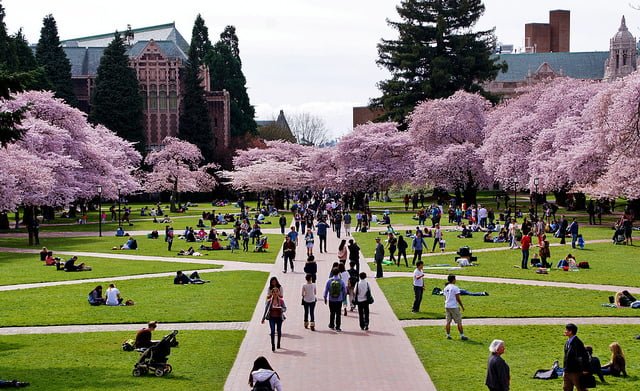 With a child on the way, we have lots to think about.  What to name him/her, how to get all the proper nutrients, natural birth vs. C-section, and how to pay for college

It might be a little early to be thinking about college, but that is the point of biggest concern shared in comments on the blog and on reddit about our estimate for the cost of raising a child.  In general, people are concerned that I am too optimistic about stock returns and not pessimistic enough about the rate of growth in tuition

College tuition is a large cost that families face, and it has been rising rapidly over the past 20 or 30 years as more people attend college

A graph similar to this one is often used to express this point, which shows that the rate of growth of tuition expenses at a 4-year nonprofit University has increased much faster than the general cost of living

That looks pretty dire, but when compared in equivalent dollars, milk costs less today than it did 35 years ago.  But does it matter if tuition has increased in cost by a greater percentage than a bicycle, a pint of beer, or a pair of socks?  This is definitely the wrong way to think about it.

What matters is the value of the education, and if we choose to get a degree, how to pay for it and how much to pay for it (there is no use crying over spilled milk)

Advocates of getting a college degree claim that college graduates (generally) earn more income, have greater workplace benefits, and have lower rates of unemployment than peers that don’t have a college degree.  But this comes at a price…  4 years of studying instead of earning an income, and the expense and possible debt load of paying tuition and related expenses.  This interesting and beautiful tool helps visualize the comparison (although I would like to see some changes to improve its accuracy:  include student loan interest, taxes, and investment returns for the early investor.)

Let’s assume that we’ve decided that a degree was worth pursuing, either because of expected financial benefits or social or family pressure.  This is most likely the case if we’ve decided to get a degree in Computer Science or Law, and less likely to be the case if we study 19th Century French Poetry (except perhaps for those families descending from famous French poets.)

(Watch through at least 40 seconds)

In our case, we are planning 20 years into the future and expect to use the stock market as our primary investment vehicle.  When comparing stock returns of the past 35 years to tuition and cost of living increases, this looks like a reasonable way to go

But wait, there is more

This is our baby’s college fund we are playing with, we aren’t going to spend those dividends, we are going to reinvest them!

With a 20 year investment horizon, investing in the stock market seems like the way to go.  In all periods from 1979 to 2013, investing less than 50% of a median families income in the year of conception (and often much less) would have provided enough funds to fund 4-years of tuition 20 years later

What is a Degree Worth?

At some point, tuition increases exceed a reasonable point and it is no longer financially rewarding to pursue higher education

If tuition continues to increase as it has over the past 35 years, what will tuition look like when our child is ready to entire the ivory towers?

But wait!  Saving 25 years of annual expenses is sufficient to allow early retirement!

Since 20% of median income earnings will go to taxes, just give your kid the cash instead of paying tuition and let them retire at age 18.  This will allow them to live a median income lifestyle forever, without working a single day (and just maybe they will sit at home reading 19th Century French Poetry.)

But what is reasonable?

It depends on income.  If a college degree would come with a “guaranteed job in the field of study or you don’t pay” clause, and a college degree was guaranteed to pay more than a high school degree, then a for profit university could be expected to obtain the equivalent of a professional recruiter or agent…  10-20% of income.

Since a degree has neither of these guarantees, the fees would be less, more in the neighborhood of 3-5%.  Since future income must still be earned, trading hours for dollars, this should be reduced further

Since a university wants up front payment, we have to determine the present value of a 40 year career with annual salary increases that exceed the cost of inflation.  This is basically the Present Value of an Annuity

If a degree were to provide a job that pays 2x the median income (~$100,000), and annual salary increases of 2% greater than inflation (5%), then an equivalent annuity would have a present value of $1.7 million.  Half of that is because of the college degree.  The university can have the agent fee of at most 5%, or $43,000.  Tuition would then be about $11,000 / year, more for high income jobs and less for low income jobs

This is a bit more than the tuition at most public universities for in state students (average $8,900 in school year 2013-14.)  Despite the rapid rise in State College tuition, and the relative simplicity of this pricing model, it seems reasonably priced

Tuition has long been rising faster in price than general cost of living, but even at today’s prices state schools seem reasonably priced for jobs that will earn $100k/year or more.  For jobs that earn less than that, we should question if a college degree is the right solution (which it may be for non financial reasons.)  Private 4-year university’s appear to be substantially over priced

Recent trends in tuition increases are not sustainable, but continued increases in price in line with general income trends would be expected.  I expect new business models (and the internet) to provide substantial price pressure on the current education models

Even at today’s prices, with the US model of government subsidization of student loans, students are facing unreasonable debt loads.  Either relative prices come down or fewer students attend college.

The stock market is by far the best investment medium for long term financial gains.  With a 20 year investment horizon for our child’s tuition, the stock market is where we will invest.  Based on historical returns, investing a minimum of $25k today should provide sufficient funds to pay for tuition.  This assumes worst performance return over a 20 year period in the stock market, and that tuition continues to increase at much faster than inflation, and that our child chooses a private 4-year university with no scholarship.

This should be sufficient margin, but to further eliminate risk, we have already mentally set aside much more than the minimum required

Do you think college is worth it?  What would you do to save for a future child’s education, if anything?

< How Much Does It Cost to Raise a Child? For the Love of Biking >