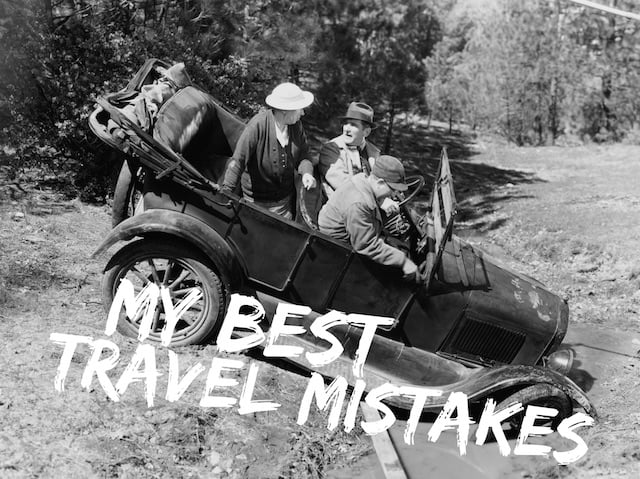 I sometimes hear from respected members of the Go Curry Cracker Community that traveling internationally can be a daunting prospect.

“I wish I was as confident as you guys, to go off into the great unknown and have grand adventures! I’m too worried that I’ll make a big mistake.” – nice person from a GCC meetup

Mistakes? Oh yeah, those definitely happen. Let me tell you – I am an expert at making travel mistakes.

We are currently in Thailand, but not for lack of trying. I attempted to check in for our flight online, only to discover that my passport was about to expire.

Do you know that requirement where your passport needs to be valid for 6 months to be allowed entry? Oops. Mine expires in a few weeks.

The airline only asked if I was aware of the expiration date. The Thailand Immigration officer gave me the stink eye, but since he had already sent my spouse and kid towards baggage claim he just waved me through. I think he just didn’t want to deal with it at 6 am.

I’ve already scheduled an appointment for a new passport once we get back to Taipei. Hopefully I can get a new one before my residency permit expires in a few weeks, cuz that would be messy.

Once upon a time, I was on a business trip to the UK. Heading home, I packed all my things, put my passport in my pocket, and boarded the Heathrow Express at Paddington station. When it was my turn at the check-in desk, my passport was nowhere to be found!

The airline staff was super supportive, helping me make a couple of phone calls, first to inform the police that I had a lost passport, and second to get permission from the US government to return home without it.

It was in the middle of that second call when somebody turned in my passport to the First Class desk of the same airline. Whew, that was a close one!

We arrived late in Budapest and I quickly got some cash from the airport ATM to pay for a taxi to our Airbnb. Somehow I managed to get about $1,000 in cash instead of $100, and the taxi took credit cards anyway (as did every other place we went.)

The morning of our departure I still had about $1,000 in cash, but it was Sunday and the first several currency exchange places I walked to were closed.

I thought for sure I was going to have to exchange funds at the train station for a ridiculous 20% fee or something, but fortunately, I found a place with no fees and a decent bid/ask spread. It’s always the last place you look…

When we were in Guatemala I tried to get some cash from the ATM… only to discover that the card had expired. Guatemala had primarily a cash economy, so this was bad news.

Fortunately, I had a backup card, although it charged a fee for overseas withdrawals. (Now both our primary and secondary cards have zero fees and reimburse for ATM fees.)

I ended up having a new card sent to our Traveling Mailbox and forwarded to a friend who brought it down (along with some really nice shoes.)

Leave card in the ATM

We try to pass the majority of our spending through credit cards for maximum rewards points, but I still pay rent in cash.

I guess I’ve gotten into a specific cash withdrawal habit because I walked away from a new ATM machine this week with the card still inside. In Thailand.

The bank phone answering service was really helpful though:

“What is your phone number sir?”

Uh, I don’t know…. it is a temp SIM I just got from the airport.

“OK, no problem. What hotel are you staying at?”

Anyway, I got the card back a few days later.

Going to the Airport a Day Early

There is a lot to keep track of when planning a vacation. LIke what day your flight leaves.

Long ago, Winnie and I were going away for the weekend, flying from downtown Taipei to a beach area in the south.

We got to the airport pretty early, about 25 hours or so ahead of schedule.

The staff was really nice though and got us on that day’s flight. Extra vacation time for the win!

It’s kind of a dumb move, but not as dumb as…

Going to the Airport a Day Late

Years ago I ended up with 2 free tickets to any British Airways’destination. From their flight map, I picked the furthest and longest possible flights, to Mauritius off the coast of Madagascar.

When we arrived at the airport we were kindly informed that we missed our flight by 24 hours. The airline staff explained our best option was to catch up to our itinerary by purchasing a 1-way ticket to Mauritius at a price of about $2,000/person.

So I did what any masculine individual would do. I cried.

I’m sure a passenger in distress is a common thing, but on this particular day there was an abundance of empathy. BA put us on a different flight that day, no charge. The only downside is we had a 2 day layover in London.

(Also thanks for losing our checked bags for 2 weeks.)

So there you have it, mistakes happen. I probably make more than most, and I didn’t even mention that time I got in a bar brawl with some senior citizens or the time I forgot to bribe Mexico immigration.

It is unlikely that I’ll repeat any of these particular mistakes, but I’m sure there will be many more ahead. It’s a normal, but colorful, part of travel.

What are your best travel mistakes?

< US vs International Investing Roth Conversions vs Capital Gain Harvesting >