1,000 feet higher and an hour west of Morelia, lies the small town of Patzcuaro, one of only 100 Historic World Treasure Cities names by the United Nations. There is a lot to love about it

We made our way to Patzcuaro on a local bus packed with Mexican families.  A quick taxi ride to the Centro brought us to our old boarding house hotel, Posada de San Augustin.  Perhaps the only people in the hotel, we had our pick of more than 20 different rooms.  As luck would have it, we couldn’t have found a better location.  Located directly on the Plaza Chica, we were adjacent to the local market and the main hub for the small local city buses.

The local market is the biggest we’ve seen and it was completely packed with people.  The vendors were incredibly friendly, offering us samples of various fruits we hadn’t seen before, such as the nanche.  I’m glad I tried it, but don’t feel the need to do so again.  Other popular items were picked pig’s feet and tacos de cabeza de res (cow head taco’s.)  One of our dining companions ate a few taco’s filled solely with cow eye.  Mmmmm

One of many local fruit vendors

After lunch we hopped in a little van, aka a city bus, for the short ride to Lake Patzuaro.

A quick bus ride in the sun

Lonely Planet elegantly describes Lake Patzcuaro as so:  you will come over a rise to find a lake so blue that its edge blends seamlessly with the sky.  Oh Lonely Planet, how wonderfully you twist the facts to create your poetry.  There is really only one color that can accurately describe this lake.  Brown.  Other adjectives that come to mind are dirty and polluted.  Years of overuse and abuse of the water system had eked its tole.

We hopped aboard a boat with 50 or so of our closest friends and our new favorite mariachi band.  They played so well that several people got up and danced.

A beautiful green boat on a brown lake

On the other side of the boat ride is the island of Janitzio, on top of which is a giant statue of José María Morelos y Pavón, a priest and rebel leader in the Mexican War of Independence. As this small wave of people disembarked, we were bombarded with offers from the locals to purchase their wares. Declining graciously numerous times, we began the slow winding path up the hill.

The climb up the hill cuts back and forth, the entire walkway was bordered with restaurants and tables filled with items for sale.  At every intersection was somebody selling cups of small fried fish, about the size of an anchovy.  It was difficult to discern exactly how long the fish had been sitting there.  Did they perhaps come from that lake  we just crossed?  Neither one of us decided to try them, and as far as we can tell nobody else did either.  Perhaps the next boat load of people will buy some, another 30 minutes in the sun won’t affect them in any way, of that I’m certain

Every one of the tables had a fine selection of Chinese manufactured goods for sale.  There were various plastic toys, beer mugs in the shapes of male and female anatomy, and replicas of a painting of a burro that changed into a picture of Jesus if you looked at it just right.  I think a few changes in business model could do wonders for the local economy, as would returning the lake to a state worthy of the whimsy of my favorite Lonely Planet writer

The start of the gauntlet of street vendors

At the top of the hill is the giant statue. For 10 pesos, you can go inside and climb up the stairway to the two viewing platforms, one in the wrist and the other in the armpit. The inside is completely covered with murals of the life of José María Morelos y Pavón. The view was spectacular, a full 360 degrees around the lake 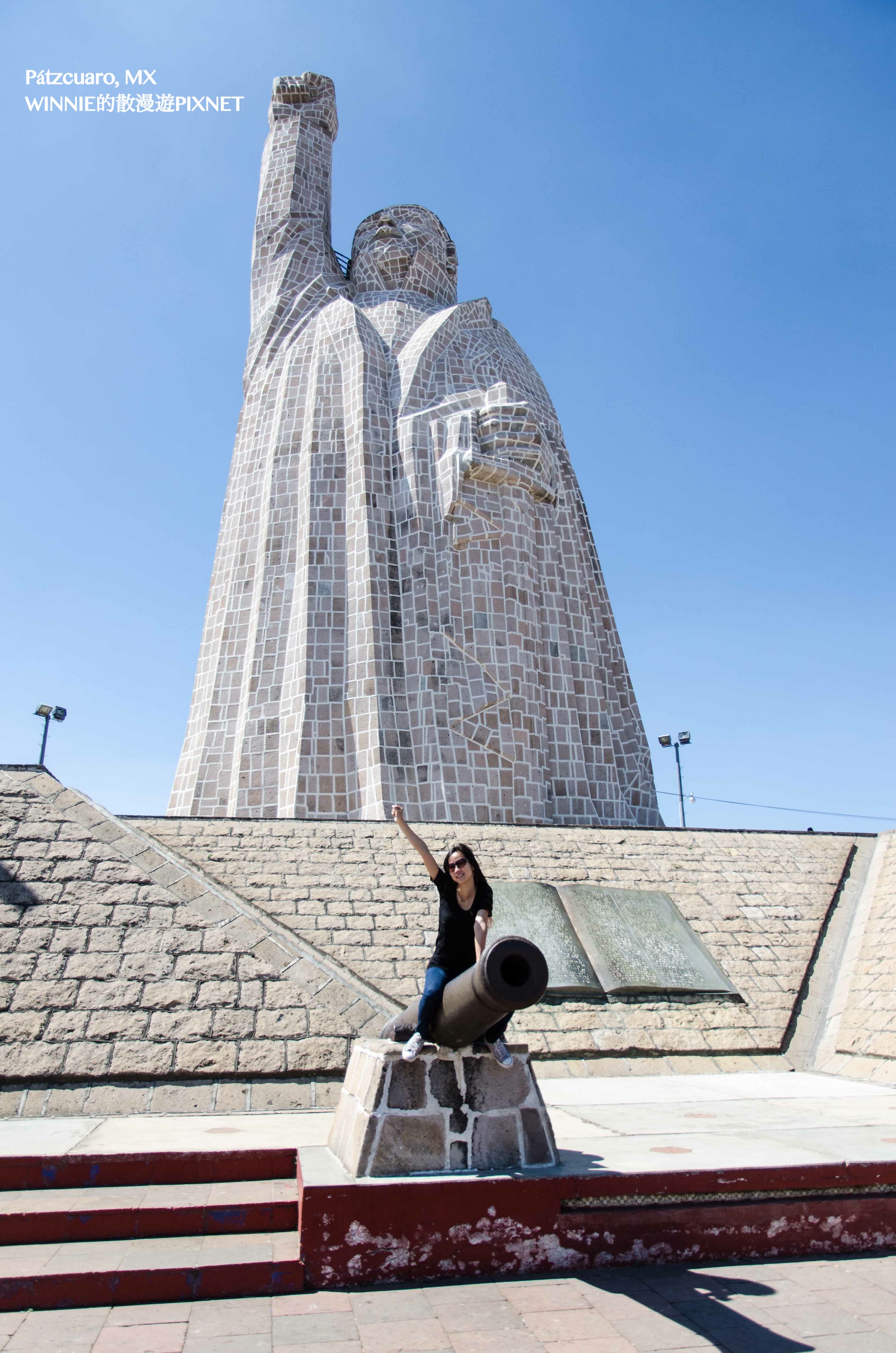 Don’t mess with Mexico. Or girls on cannons

The view from the armpit of José María Morelos y Pavón

On the boat ride back towards home, the rudder on our boat broke and we were adrift for 15 minutes before a tow boat was able to bring us back ashore.  The whole group of passengers took it in stride, the mariachi’s played a few tunes, and everybody cheered when we started in motion again.

Back in town, we strolled about the streets in search of the perfect photo.  I think we found a few

The archways around Plaza Grande

The interior of the public library:  wrought iron chandeliers, oyster shell windows, and a beautiful mural of the history of Michoacan

Back in our room for the night, we found 2 extra blankets placed on the bed. We definitely needed them, the temperature plummeted at sundown to the point where we could see our breath in the nighttime air. No longer fans of the cold, in the morning we decided to head off to warmer climates, but Patzcuaro will always have a warm place in our hearts

< Playing on the Playa Zihuatanejo, Mexico >