In the western highlands of Guatemala, hidden amongst volcanoes, fog, and jungle-covered peaks, sits Lake Atitlán.  Formed by the crater when an epic volcano imploded upon itself, the surrounding hills rise straight from its shores to impressive heights.  The valleys and shallows along the shores have become the sites of numerous small villages, largely populated by the indigenous peoples of Mayan descent.

One of these small villages, San Pedro La Laguna, with its special blend of Mayan, Spanish, and backpacker culture, has managed to capture the hearts and minds of many, including our own.  In the shadow of the San Pedro Volcano, the town rises up out of the lake onto a hillside. The winding dirt paths, alleys, and streets meander around the hills and the lakeshore with no apparent plan, and weeks after arriving we were still making new discoveries and finding new shortcuts.

A bit off the beaten path, we learned of San Pedro from a fellow traveler while in Mexico, and decided to visit for a week or two to study Spanish. 6 weeks later we left with a great deal of angst and trepidation. We managed to escape, while many international travelers that were on journeys similar to ours have remained for months or years (or longer.)

The local English, Irish, Australian, American, Canadian, Italian, and other expats have opened bars and restaurants serving food from their homelands, making it possible to get Southern-style BBQ, Sunday Roast, hand made Italian noodles, spicy Indian/UK curries, and wood fired pizzas. It’s even possible to get respectable poutine and vegemite, if you are so inclined. There is no shortage of great food, and with a typical entree costing around Q30 (~$4), there is no reason not to try it all. Along with produce from the local market and traditional dishes featuring hand made tortillas, beans, vegetables, and roasted meats and fish, our diet did not lack for variety

Spanish school was all private lessons. Each day we would each sit alone with our own teacher for 4 hours, learning at our own pace and based on our own needs and experiences. We advanced quickly during our 3 weeks of lessons and our conversational ability has improved tremendously. In the US this type of training would be ridiculously expensive, but in San Pedro the going rate is $105 a week (about ~$5 per hour.)

Our first week in town we stayed with a local family, as recommended by our Spanish school. We found that it didn’t work well for us, and instead moved into an apartment with a tremendous view. With access to a kitchen, we made regular trips to the local market to get eggs and produce, and along with a French bakery we were well setup for breakfasts at home. We were settling in nicely, and our apartment became a gathering place for friends and fellow students

I’m honestly not really sure how we managed to find the time to attend class and do our homework.  We rented kayaks to explore the lake shore, took a boat ride to nearby towns to swim and high dive into the lake, and rode a 1 km zipline through the jungle. After all of that stress, we spent an afternoon in a hot spring next to the lake with a bottle of wine. Others enjoyed a traditional sweat lodge or massage, while some preferred a lager or fresh mint mojito.

1 km Long Zipline Over The Lake

The natural environment is a paradise for outdoor enthusiasts. One of many popular hikes and one of the most beautiful things I’ve ever seen, we climbed Indian’s Nose to watch the sunrise. The trail to the top of San Pedro Volcano is just outside town, and can be done on foot or horse.  The whole region is a hiker’s paradise

The people of San Pedro and the nearby lake villages are incredibly warm, friendly, and welcoming.  Life seems slower and a few decades behind many modern parts of the world.  All around the lake many people dress traditionally, make their own clothing, do laundry and bathe in the lake, and cook on wood stoves. Spanish is a distant second language, with Tzu’tujil being the most common in daily life. Many children don’t even learn Spanish until they begin formal schooling. A street vendor explained to us that over 20 languages are spoken around the lake, and each village may have their own language and own style of clothing

Back Strap Loom, Making a Tapestry

Grinding Corn for Tortillas at the Local Mill 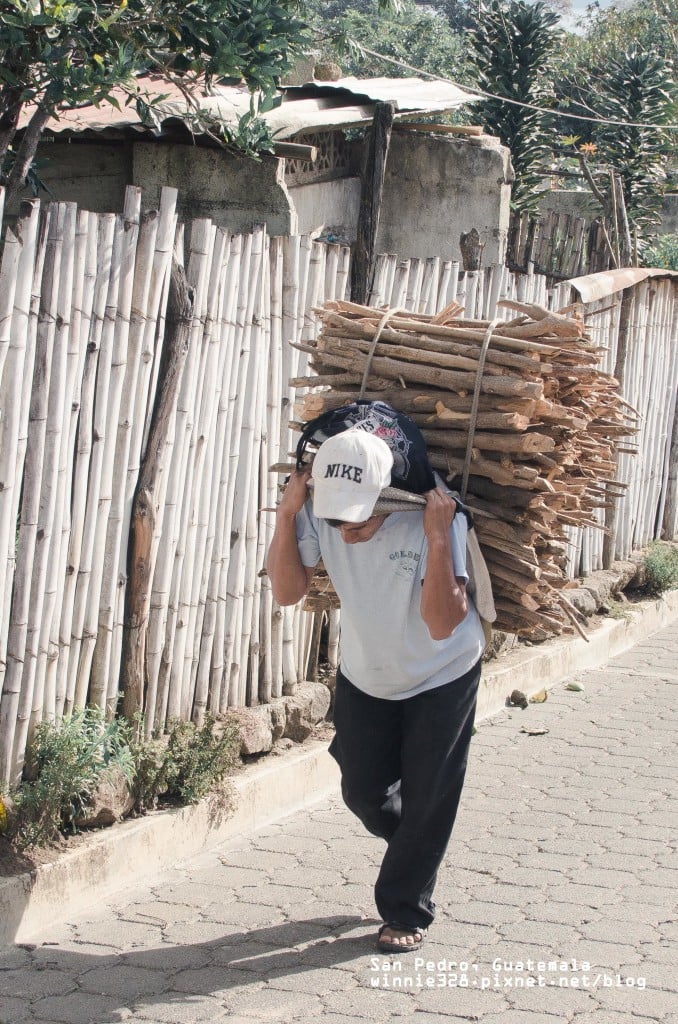 We had been enjoying our lives in San Pedro for several weeks, studying Spanish, exploring the lake and nearby volcanoes, and having many great meals with new friends, when we learned that Wikipedia referred to San Pedro as “the naughty village.”  Had we done anything naughty?  Sure, on occasion we had been asked if we would like to purchase some marijuana or some certified organic CBD tinctures, and at least one local English Pub has found a creative way to promote their Friday Happy Hour (50 cent Rum & Cokes anyone?), but naughty?

Perhaps I’m less innocent than the Wikipedia article author (highly likely), but if ability to purchase drugs and alcohol is the criteria, we might as well refer to it as Naughty Guatemala or Naughty America.  Or perhaps even more appropriate, Naughty World.  I can’t remember having visited anywhere with a lack of mind-altering substances.  In any case, the party scene is there for people that want it, and when drinks and a taxi ride home are only $1 each it is certainly easy to have one too many.

I would write the Wikipedia article differently, instead focusing on the food, the environment, and the friendly people.  Oh, I guess I just did.  The combination is magical, and I could see us staying in San Pedro for an extended period in the future

But for now, we need to move on.  We are a little sad to go since we will miss the next Sunday Barbeque, but we have other places to go and other people to see.  Thank you San Pedro, you’ve been great

Street Art, and Where Babies Come From