A Sunny Day at The Split

Avoiding the numerous chocolate milk colored lakes in the middle of a road made of sand, we make slow progress towards the other side of town.  A few super sized Americans on golf carts spray tourists and distracted locals alike as they charge forward at full speed, oblivious to the unhappy faces and wet and dirty people left in their wake.  The mosquitoes are already out in force.  Daily rain has provided unlimited breeding grounds.  None of this matters though, we are on our way to our 3rd lobster dinner in as many days.

Lobster season opened a few weeks ago, and we’ve been stuffing ourselves with lobster omelets, lobster burritos, and grilled lobster.  Lobster, lobster, lobster.  It was available in anything and everything, and for ridiculously low prices.  It was cheaper than fish, cheaper than pork, and cheaper than chicken.  This is probably what heaven is like (although I’m certain heaven has lobster ice cream as well)

Less “American” (and expensive) than San Pedro and Ambergris Caye, Caye Caulker is full of backpacker hostels and reasonably priced hotels and restaurants.  Originally, we came here to scuba dive The Great Blue Hole, a submarine sinkhole a couple hours off the coast.  That plan changed though.  No less than 20 people told us that it was a great disappointment.  Combined with the daily rains, the high prices ($200+/person), and the fact that we had previously dove a submarine sinkhole in Palau, we settled for lobster instead.   If anybody has a positive Blue Hole experience, please tell us about it!

We arrived in Caye Caulker via tourist shuttle from Flores, Guatemala to Belize City, followed by a 1 hour ferry ride.  The border crossing was quick and efficient.  A guide from one of the ferry companies was offering helpful advice and handing out discount ferry coupons.  In hindsight, we should have used the coupon to buy a round trip ticket instead of just one way

We had a reservation at a local backpacker lodge, but when we arrived it was a bit…  gross…  No worries though, we just took a short walk and asked around until we found a place.  Several people provided recommendations and were super helpful.  The people of Belize are wonderfully friendly

Life is slow on Caye Caulker.  When it rains everyday, life is even slower.  Our week in Belize was wonderfully lazy.  On our one full sunny day, we went to a beach and feeling optimistic, we signed up for a snorkeling trip for the following day.  Beaches are numerous (it’s an island), clean, and the water is a striking blue.  The sand flies are abundant 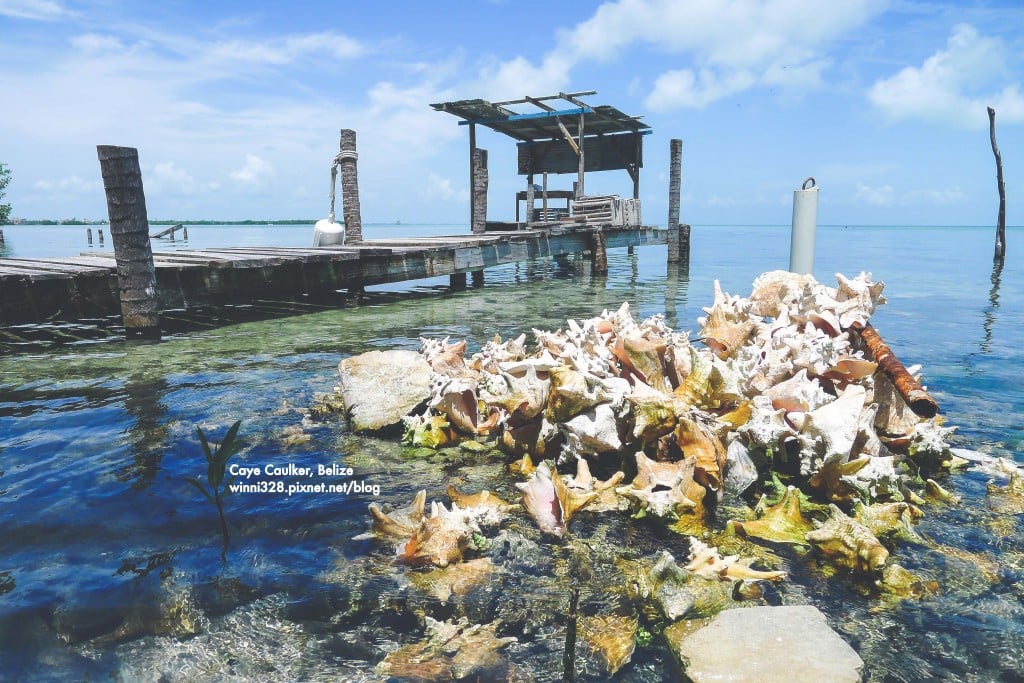 Conch Shells at the Beach

The Strip is the most popular swimming area, just on the north end of the Caye.  The water rushes through this gap in the island like a river.  I swam across with moderate difficulty to a grassy and buggy beach on the far side.  A small concrete walled swimming area away from the current was a nice place to hang out for the afternoon

Hanging Out at The Split

Swim Time at The Split in Crystal Clear Blue Water

Waking to a sky full of black clouds, our snorkeling trip was an adventure.  Shortly after departure, the sky opened up and dumped buckets of rain on our heads.  15 of us hid as best we could in the “cabin” of a small sailboat, shivering from the cold.  After a time, we gave up and dove into the sea since the water was warmer than being in the rain.  I never saw lightning jump from cloud to cloud before, but then again I had never gone swimming in a lightning storm before

Another Day in Paradise

Once the rain stopped, we snorkeled at Shark Ray Alley.  A few small fish thrown in the water brought no less than 50 large nurse sharks to feed next to our boat.  A small tube filled with fish heads thrown onto the sandy bottom intrigued a few large rays for an hour, before they pulled it off the rope and swam off with it.  I managed to recover it later after a brief fight with one very upset ray.  This was definitely the highlight of the trip, along with not being struck by lightning

We would love to return to Belize for more lobster, after the rain stops. The water is beautiful, the people are friendly, and the prices are reasonable.  There is a lot more to Belize than we were able to see during our short time here on Caye Caulker.  The mainland has an abundance of Mayan ruins, some jungle, and a few caves to explore.