Do Turtles Have Belly Buttons?

A short ride west of Puerto Escondido, Mexico lie miles of undeveloped beaches.  Every year, thousands of sea turtles return to these sandy shores to lay their eggs.  A month later, newly hatched babies climb to the surface and clamber their way to the sea

A couple hours before sunset, we arrived at a small shelter on the edge of the beach where a few volunteers were working to protect the eggs and baby turtles.  Turtle eggs and steaks were a common part of the diet of the people in this region not that long ago, and despite laws protecting them people still steal the eggs and slaughter the mothers.  We heard about an arrest a few years ago where 2 guys were found with 30,000 eggs in their truck

Working with ATV’s, the volunteers patrol the beach from sunset until 6 am, collecting what turtles they do find and storing them in water tanks in the shelter.  The turtles are then released in mass around sunset, when bird and fish activity at the shoreline is lower.  Less than 3 in 100 survive to adulthood

Site of today’s turtle release.  Even a Rainbow Came Out to Mark the Occasion

We were among the first to arrive for this evenings release, and were welcomed by 300 or so baby turtles swimming about in their holding tanks.  Holding them in your hands, it is surprising how much force they create with their flippers and yet you realize how fragile they are.

Outside the shelter, several of the known egg caches were protected by plastic fencing and shade structures, with labels indicating the date and quantity of eggs laid.  The combination helps prevent animals from digging up the eggs and the newly hatched turtles from drying out in the sun.  As we were exploring this area, we were extremely lucky to witness a few heads peek out of the sand.  One of the volunteers helped dig out the newborns.  From a total of 123 eggs, 56 of them were struggling to the surface right before our eyes.

Helping turtles to the surface

Only a few minutes old and walking already

The turtles made an effort to head toward the sea, although their sense of direction wasn’t the best.  They would head off in all different directions.  I’ve read that they will head towards light, usually moon and star light reflecting off the sea, but the daylight and artificial lights cause confusion

We collected the turtles in small plastic buckets, and newcomers did the same with the turtles in the shelter’s holding tanks.  As sunset approached, together we placed hundreds of our new friends on the sand about 200 feet from the surf.  In unison, they marched to the sea and we all cheered them on.  A big wave surged and the turtles were thrown back to the beach, bouncing and tumbling, rolling more like a stone than a living being.

We gathered them together again, only a few having made it into the sea.  Again they marched, and again they were washed back.  Even the smallest wave was a force they could not contend with, but with help and persistence eventually there were only humans remaining ashore as the sun sank into the waves

A Perfect End to A Perfect Day

This event was one of the most amazing experiences we’ve had. The beach, the rainbow, the sunset, and the turtles were all stunning and surreal. It’s not everyday that you get to witness the miracles of life

And lest I forget, I have no idea if turtles have belly buttons.  You will have to decide for yourselves 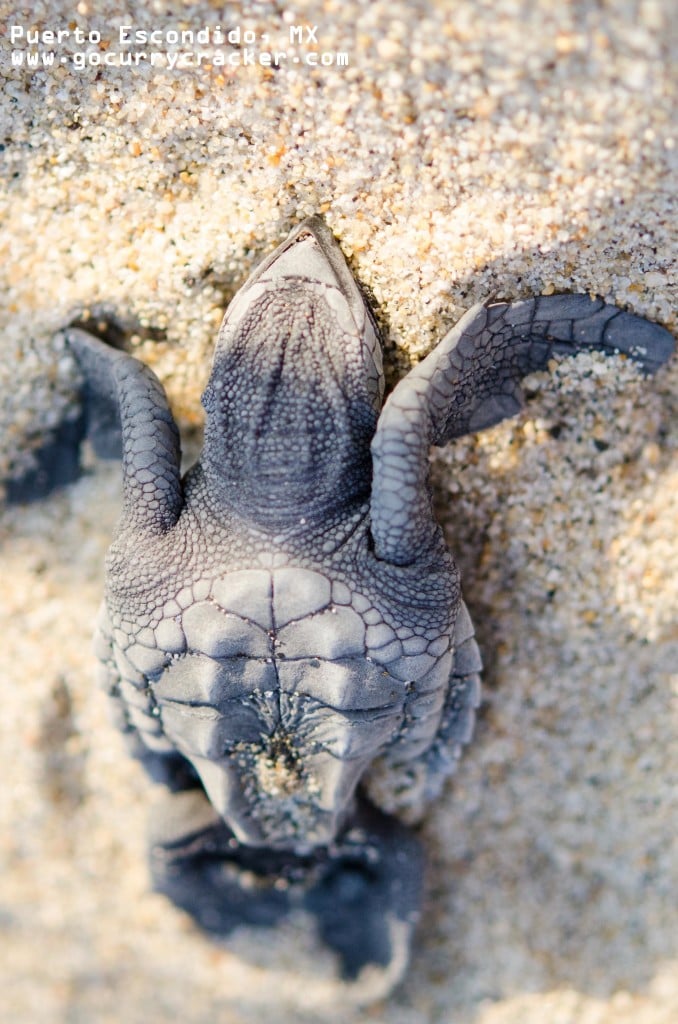 More:
Interested in more photos? Take a look at our Facebook album and view the bonus videos

Finances:
Taxi ride to the beach and back: $400 pesos for the car, shared by 4 people
Tip for taxi guy: $50 pesos
Tip for amazing volunteers on the beach: $100 pesos

< But I Don’t Want to Go to Bed Mango Madness >