Outside of the small Mayan village of Lanquin, Guatemala are two natural geological formations that draw visitors from around the world, the Lanquin Caves and the pools of Semuc Champey

The Lanquin Caves are a 15+ km long network of caves through which flows an underground river.  From the town of Lanquin, it is only 9 km to get to both the caves and pools.  9 km of single lane dirt and rock road.  With 12 people smashed into the back of a pickup truck whose suspension has long been neglected, we bounced and jostled like cattle on our way to market as we went up and down countless hills.  On occasion the truck would stop to slip into a lower gear, before climbing straight up the sheer walls of the next hillside

An hour later we arrived at the waterfall that marks the entrance to the caves, and the river was raging. Last nights lightning storm and torrential downpour were beautiful to watch, but now the rising water levels mean we would only be able to enter about 200 meters into the caves, about half of the normal tour 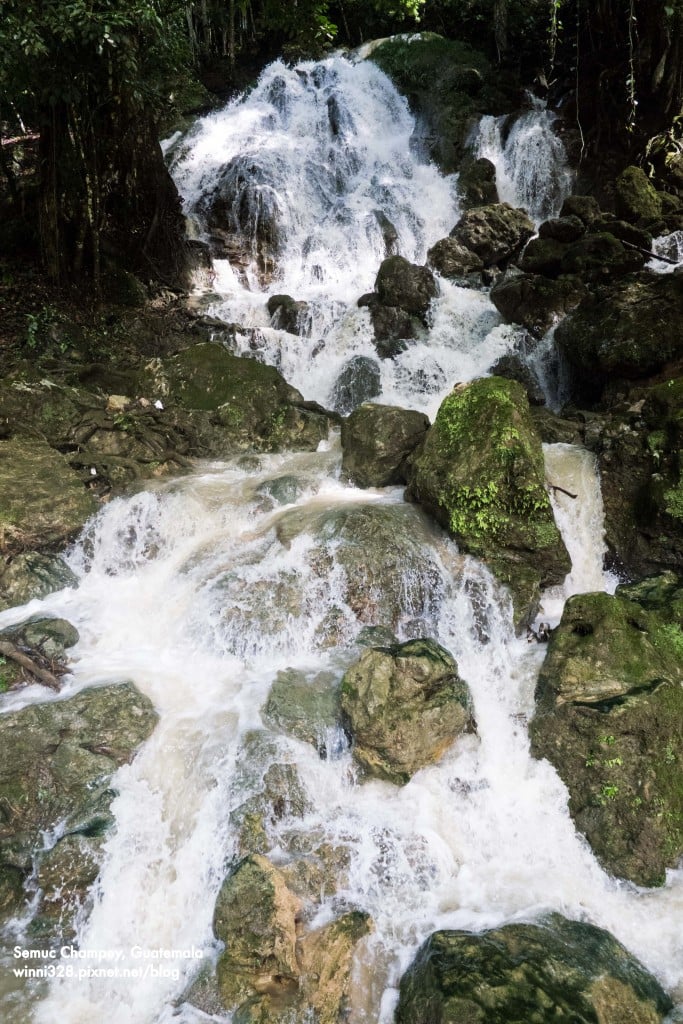 Waterfall at the Mouth of the Caves

As we hiked up to the cave mouth, our guide handed us each a candle.  We then jumped into a pool of water that was deeper than our heads and swam into the darkness, holding our candles overhead.  Lack of a waterproof camera means no photos for this part of the day

It was nearly impossible to see anything with a single candle, but when everybody gathered in the same space we could see the stalactites overhead and an occasional bat.  We worked our way up the river, sometimes swimming, sometimes walking in the shallows, and sometimes climbing on rocks, ropes, and ladders.  One opening had barely enough room for our heads to stay above water.  With the litigious nature of the United States and the cost of insurance, something like this could never exist back home.

As we approached the rear of a large chamber, we could hear the sound of water falling ahead.  Our guide took our candles and climbed a sheer rock face into a small crevice while we waited in the darkness.  As he placed our candles along a ridge near the ceiling, the chamber ahead slowly brightened to reveal a waterfall shooting out of a hole 10 meters up the wall

It was near impossible to swim against the current, but a small ledge along the side allowed us to walk into the back of the falls.  It was impossible to see as we passed through, with the full force and weight of the falls slapping down upon us.  On the opposite side, we jumped out into the flow of water and the current washed us downstream again

With lower water levels, it is possible to climb up a ladder along the side of the waterfall, but we couldn’t even see the ladder and had to turn back.  In a side tunnel we clambered over rocks in the candlelight until we reached a ledge that fell away into darkness.  The rocks here were covered with moss and formed a natural slide formation.  With no idea how far we would fall, we slid down the rock wall and fell into the pool below

The cave tour is definitely not for everybody.  Anybody not in reasonably good physical condition should definitely skip it, along with anybody that has a fear of closed spaces, darkness, or dying in a cave.  This is no theme park, the danger here is real

We had lunch on a bridge that crosses 12 meters above the Cahabon River, so naturally we took the time to base jump a time or two

A short way up the road is the entrance to the Semuc Champey National Park.  In the Maya Q’eqchi’ language, Semuc Champey means “where the river hides beneath the earth.”  At the base of a natural land bridge, the Cahabon River plunges underground for 300 meters.  On top of this limestone bridge, a series of natural springs form clear pools and waterfalls, perfect for an afternoon of swimming

We hiked 30 minutes up hill to get to The Mirador, for a spectacular view of the whole valley and series of pools.  The path was rock and dirt and mud, and my flip flops were not up to the challenge.  On the way down, both flip flops blew out and I did the remainder of the descent and the rest of the tour bare foot.  (Fortunately there were no pop tops.)  Due to the numerous sharp rocks, this meant I didn’t explore the full path up the pools

Hike up to The Mirador

Semuc Champey from The Mirador

Through a series of waterfalls, the water from each pool drops into the next before rejoining the Cahabon River when it returns from its underground journey.  Starting from the top pool it is possible to ride the moss and rock slides over the falls into the pool below, all the way down to the final pool

In the lowest pool is a great rope swing, perfect for crazy acrobatics.  Some were more graceful than others.