An hour bus ride outside of Mexico City sit the remains of a 2000 year old city, Teotihuacan.  Predating the Aztec empire by 1000 years or more, the people of Teotihuacan believed that the universe and man originated from a cave under the city.  Temples to various gods were constructed along the 2 mile long Avenue of the Dead, with the Pyramid of the Sun and the Pyramid of the Moon being the largest.

Our day trip to this archeological site began at the Terminal Central del Norte, where we boarded a Autobuses Teotihuacanos bus to the site for 40 pesos each.  We loaded up on water and empanadas and sat back for the ride.  We were dropped off outside and walked through the main gate.  Entry tickets were 50 pesos each.

In the parking lot, we came across several elaborately dressed men chanting and sitting on a spinning platform atop a 200 foot tall pole.  4 of them stood and jumped into free space, their fall halted by the ropes attached to their feet.  The platform continued to spin along with the 4 suspended men rotating around the pole, getting progressively closer to the ground and the pole as their speed waned.  Perhaps this is a traditional form of bungee jumping?  I’m not aware if there is a cultural or religious significance to it, or if this was just a few guys enjoying their weekend.  In any case, it was fun to watch

Inside the main gate were an army of trinket and jewelry salesmen. If you ever wanted to buy a Chinese manufactured wooden mandolin or a plastic statue of Jesus, you might decide to come here to make that purchase.  One of the more popular items sold to children were some wooden whistles, carved into the shape of a jaguar head.  A talented whistler could make these sound like the growl of a wild cat or the scream of an eagle.  In the hands of children however, it just created a loud racket that persisted throughout the entire 83 sq. km of the archeological site.  A few people may have made a few bucks that day, but any sense of sanctity was lost.

2 of the approximately 497,000 hawkers along the Avenue of the Dead

We began our explorations on the south end of the Avenue of the Dead, the opposite end of the city from the Pyramid of the Moon.  Here we found the Temple of the Feathered Serpent and a small neighborhood surrounded by small pyramids.  Note the detailed rock carvings of a serpents head surrounded by feathers

Temple of the Feathered Serpent 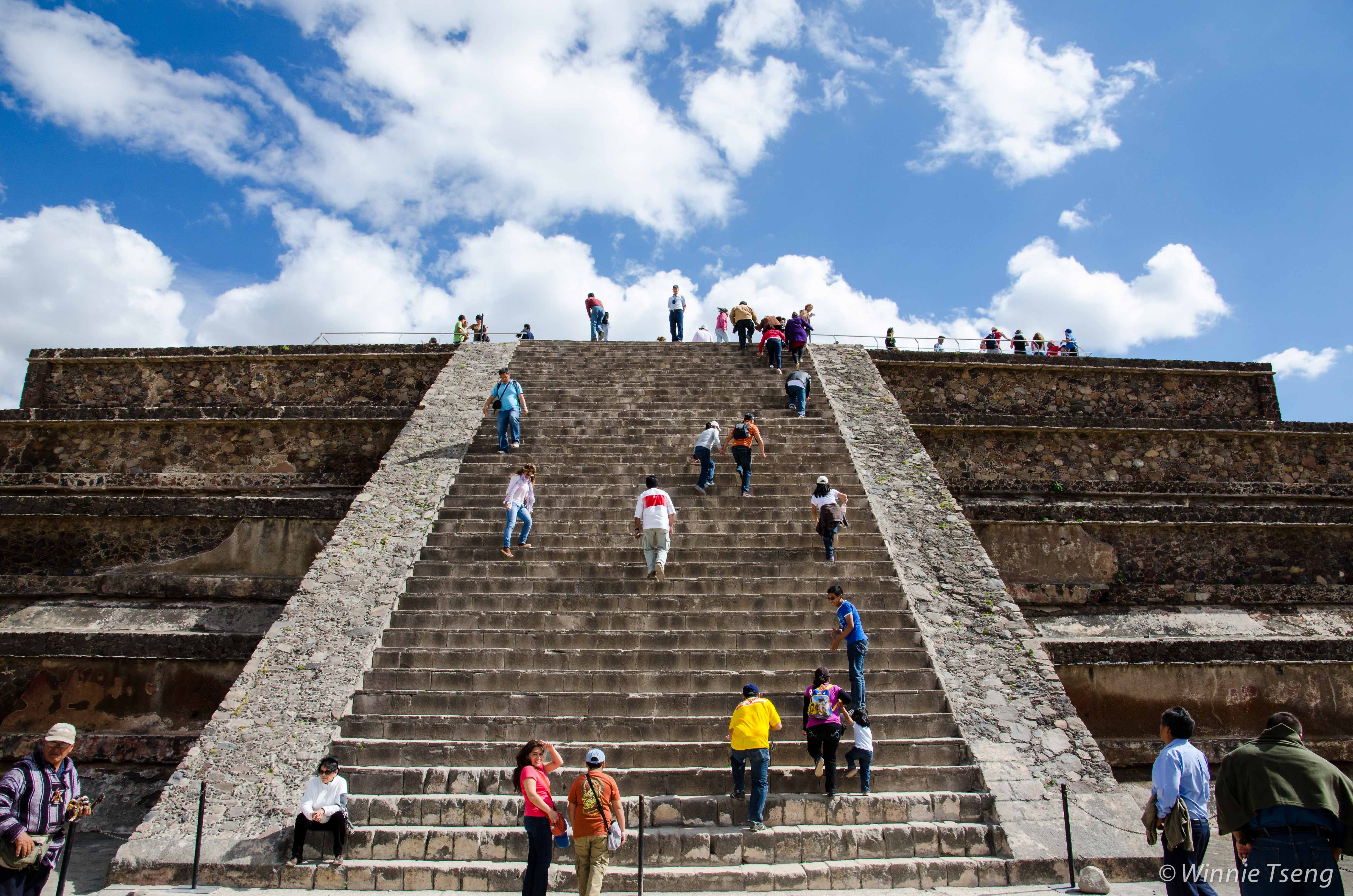 One of many smaller pyramids

All of the structures appeared to have similar architecture, with sloped steps rising along a tiered pyramid base.  I can just imagine how much labor was involved in excavating all of this stone, transporting it to the build site, and then constructing these pyramids.

The core building style appeared to be solid construction of rocks held together with mortar and pebbles.  At one time, all of this was then covered with an additional layer of plaster which can still be seen in some protected areas

Odd shaped rocks, held together with mortar and pebbles

Further down the Avenue of the Dead is the massive Temple of the Sun. It is under this temple where the cave that is the origin of man and the universe could be found. A tunnel, inaccessible to the public, leads into the center of the Pyramid to the original cave and perhaps was used for religious ceremonies

Temple of the Sun

The climb to the top is steep, made possible with the assistance of ropes.  The high altitude made it a little more challenging to climb, and we stopped to take brief breaks along the way.  The climb really made it clear just how large the Pyramid of the Sun really is, and the view from the top made it worth it

View from the top of the Pyramid of the Sun, looking southwest

At the end of the road sits the Pyramid of the Moon, a smaller Pyramid with a better view of the city

View from the top of the Pyramid of the Moon, looking back along the Avenue of the Dead

Inside a home of one of the elites of the city, some of the detailed art work was still in great condition

Painting of a Jaguar

The walk back down towards the entrance was a long slog, about 2 miles of uneven ground, with lots of climbing up and down slopes and stairs.  In the peak of day the orientation of the Avenue of the Dead, 15 1/2 degrees east of north, leaves little shade.  Despite bringing 2 liters of water with us, we ran out, leaving me wondering why none of the vendors sold any.  I guess the demand is higher for plastic Jesus statues.

Back at the entrance, we found restrooms and water.  A short wait later we were back on the bus to Mexico City, another 40 pesos each

The city is stunning and beautiful.  It’s a marvel that this was built 2000 years ago.  It’s well worth a visit