We rolled into Forks, WA on the Olympic Peninsula, the skies darkening and closing in as we approached.  Rain couldn’t be far off.  A giant banner stretched atop the road proclaimed it to be Stephanie Meyer Day.  The sidewalks were packed.  Several young men looked to be in serious need of sunshine, their pasty white skin looking a bit unhealthy.  And why are they wearing capes?  A few other guys were walking about shirtless, showing off their well defined physique and 6-pack abs, with a flock of teenage girls in tow.  It was a bit cold.  Perhaps the pasty guys were recovering from a bug they caught while going about shirtless

A little further down the road a sign offered Twilight Firewood for sale.  Well, yeah, twilight seems to be a good time to get a good campfire going.  And what’s this?!  Twilight Cheeseburgers?  And Twilight Cupcakes?  How about a Twilight Tour?  What exactly is in a Twilight Cupcake, anyway?

A bit away from the hustle and bustle in downtown, we stopped to get a quick bite to eat at a forgettable hole in the wall.  The wait staff argued in the back room over whether they could vacuum while customers were eating.  The girl that thought it was a violation of the state’s health code won out, but not without resulting to colorful language.

“What are you hunting for, elk or bear?”, one waitress asked a hairy gentleman at a nearby table.  He was covered from head to tow in camouflage and dirt.  “Well…”, he said slowly, “I’m pretending I’m hunting for elk, but mostly I’m just camping and drinking.”  The waitress giggled and gazed demurely at the hunter, touching his elbow as she laughed.  I too have always thought that guns and alcohol were sexy together.

A short while later, we were on our way out of town, feeling content that we got everything we could out of a town that celebrates their mention in a book for teenage girls

A few days earlier, we had boarded a ferry out of Seattle, bound for the rustic Olympic Peninsula to see the old-growth forests, glaciated mountains, and the rugged coastline of the massive Olympic National Park.

We spent our first night in a State Park on Bainbridge Island, with a nice view of Puget Sounds looking back towards Seattle. The next morning I went for a quick walk on the shoreline and came across a beautiful baby seal resting in the sand. My first thought was to make myself some new boots, immediately followed by, “I need to get a picture!” After sprinting to the car and back to get our camera, I saw the seal slip into the Sound to escape the swarm of senior citizens that were trying to pet it. “Oh, isn’t it so cute?!” Unfortunately I didn’t get a good photo of the seal or the senior citizens standing next to the sign that said “Stay away from the baby seals!”

Later that day we strolled around Hurricane Ridge, with incredible views of the glacier on Mt. Olympus and the surrounding mountain chain. On the opposite side, you can see all the way to Victoria, BC, Canada, across the Strait of Juan de Fuca. A young fawn and her mother passed the day people watching

Don’t Look at Me

We spent the night camped alongside Lake Crescent, the waters a stunningly deep blue color.  The still waters reflected the fall colors while the sun set somewhere in the distance.  We stopped to chat awhile with one of the tree people 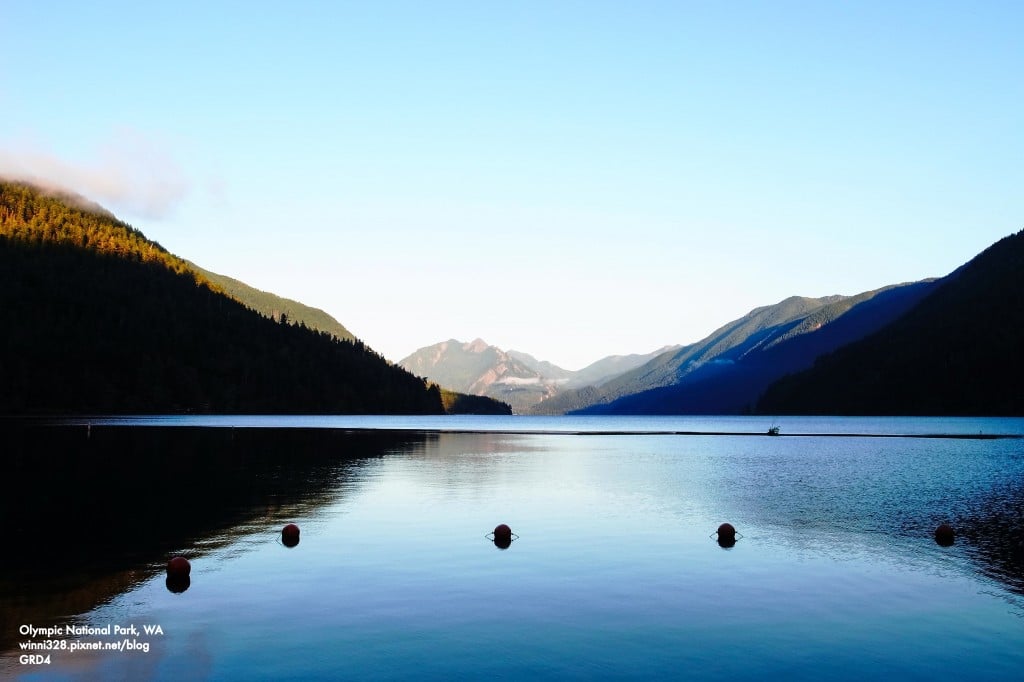 My, What a Big Nose You Have

A little thing we noticed about camping in Olympic National Park is that there are no showers, with the exception of the resort at Sol Duc. Rather than pretend we were pleasantly scented, we drove up through the picturesque Sol Duc Valley and relaxed in the natural hot springs.  The sulfur scented water left our skin feeling incredibly smooth, and our spirits refreshed and relaxed.  We moved on to the Pacific coast.

We walked through the maze of a fallen driftwood forest, the chill salty wind whipping at our clothes. The crest of a sea stack was barely visible above. With no clear path in sight, we climbed atop a van sized wooden boulder, and gazed upon the Pacific Ocean. The beach was littered with well worn stones and perfectly smooth driftwood. I read my book in the nook of a nature crafted chair. 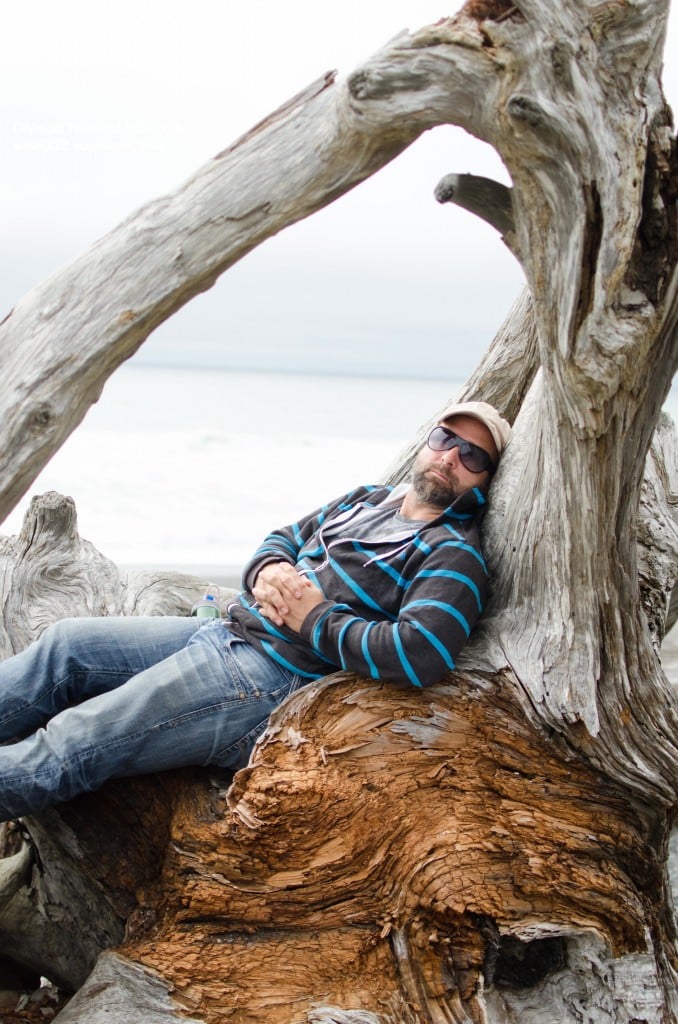 A Gift from Nature 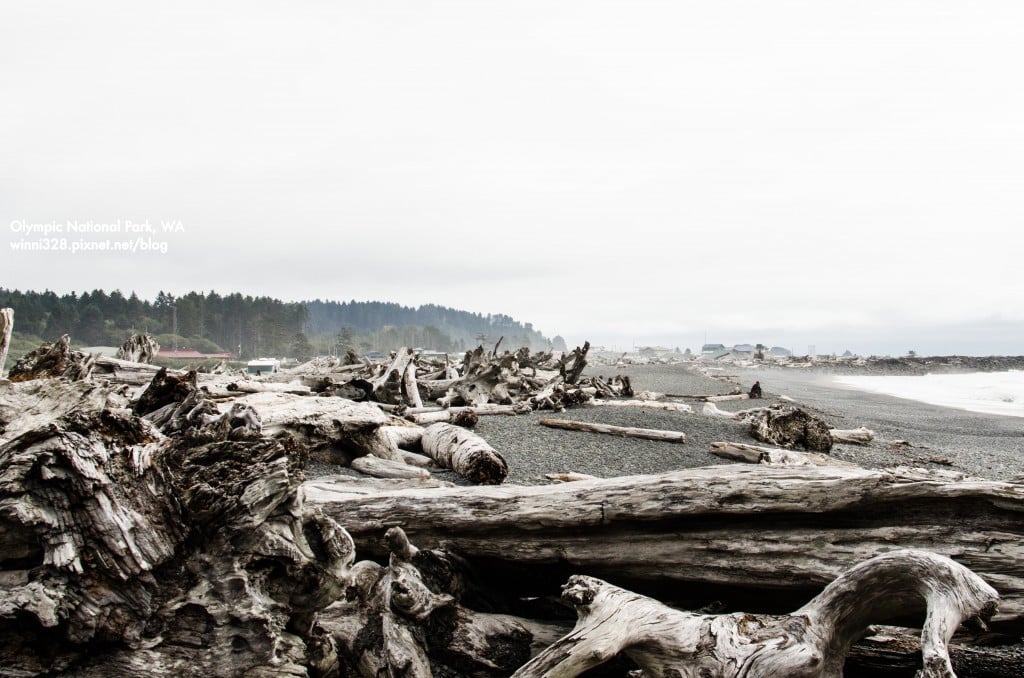 The next morning, we passed briefly through Forks, WA before making our way to the Hoh Rainforest. Marble sized drops of rain fell from the sky, obliterating all visibility. Lightning struck nearby, the thunder felt pressing down on your chest like a lead weight. We pulled over to wait for it to pass, and eventually tried to call for help, but the line was dead. A couple elk stopped by to say hello.

A few hours later we were back in Seattle, a great long weekend behind us.  The diversity in climate, geography, and biosphere in this part of the world is nothing short of amazing.  The photos, as beautiful as they are, are unable to capture the smell of the clean, crisp air, the peaceful sounds of nature, and the internal serenity found in an old-growth forest.  Thank you Olympic Peninsula for sharing your magic with us


View The Olympics in a larger map