Retire Even Earlier with Deferred Compensation

(GCC: A few months ago, today’s guest post author reached out with the desire to share knowledge about a unique option to accelerate early retirement. Thanks to a deferred compensation plan, this post was written between retirement activities in a sunny zero income tax State. Maybe this is also an option for you…)

Does your financial freedom plan include maximizing both earning and savings? Mine did, but one of the challenges with this approach was higher marginal taxes. I discovered the (GCC: subjectively) brilliant Go Curry Cracker tax avoidance strategies years ago, but filing a 1040 with a $0 federal income tax liability was impossible as my earned income increased.

My income soared as I advanced my career, and the typical tax deduction tools were already maximized. Deductions (itemized or standard), exemptions (when they existed prior to 2018), credits (usually child and foreign tax), and cafeteria plan elections (those employer deductions like 401(k)s, HSAs, health insurance premiums, etc.) shielded less and less income from taxation. As income is subject to higher marginal tax rates, the IRS adds insult to injury by phasing out IRA contribution deductibility.

If you’re earning enough to lose this benefit, your earnings are AT LEAST into the 22% tax bracket! Imagine paying an extra $1,320+ to the IRS just because you can’t deduct a $6,000 IRA contribution. Your employer giveth, and the IRS taketh… Maybe the average high earner brushes it off as a “death and taxes” situation, but if you’re aligned with the Go Curry Cracker approach to taxes you find this unacceptable.

I did too, and now you may be thinking, “there must be a way to be a highly compensated employee AND have an IRA tax deduction.” Not only is it possible, but you can also shield even more money from your taxable income. I just “stumbled” into a savings plan that allows this, but maybe some of you GCC readers can more purposely take advantage of this.

You can enjoy a large compensation package, claim the IRA deduction, and lower your tax liability if you appropriately engineer your employment situation. This requires a deferred compensation program, which is more technically defined by the IRS as a 409A Non-Qualified Deferred Compensation Plan (NQDCP).

According to the IRS a NQDCP is “an elective or non-elective plan, agreement, method, or arrangement between an employer and an employee… to pay the employee… in the future.” This is the key. The employer merely promises to pay you at a future date for earnings you could receive now. When the plan is structured by the employer correctly, money deferred through the NQDCP avoids income taxes during the year the money was deferred. However, deferred compensation may still be subject to payroll taxes (although that is not a significant concern as we’ll see later on).

To gain the deductibility back at MAGI above the phase out limit, I simply elect a deferral amount in my NQDCP that reduces my earned income below $193,000 to deduct my wife’s IRA contribution or $103,000 to deduct both of our IRA contributions! It’s also worth noting that simply reducing my MAGI below $193,000 would allow me to contribute directly to a Roth IRA if desired, without the hassle of the Backdoor Roth procedure and its pro rata rule limitations. As long as my wife and I can live off this lower income, we’ll avoid significant taxes liabilities.

According to IRS publication 957, deferrals under the NQCDP reduce the pay reported in Box 1 of the W-2 by the deferral amount. Box 1 on the W-2 is reported on line 1 of form 1040, Wages, salaries, tips, etc. These along with interest, dividends, capital gains (or losses), and IRA deductions compose Adjusted Gross Income (AGI). IRA deductions are added back to calculate MAGI. This is how the NQDCP allows you regain eligibility to deduct IRA contributions. (NOTE: Other items can increase or decrease MAGI, but I consider them too obscure for my example.)

Let’s look at a simple example with the 2019 IRS W-2 and 1040 forms using the following assumptions:

The W-2 from the employer would looks something like this: 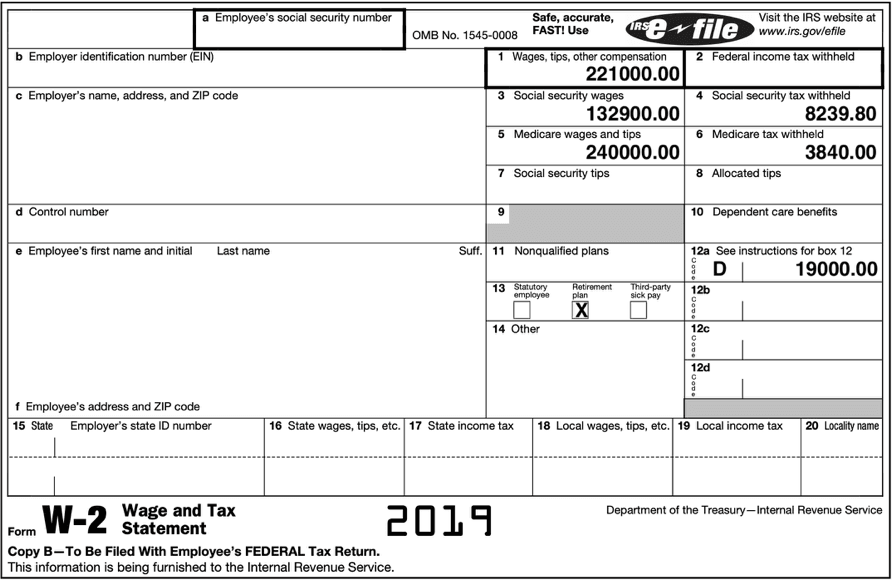 (Note: Fields that are not relevant to this NQDCP example are left blank)

The wages reported in box 1 were reduced by $29,000, which corresponds to the employee’s 401k and health care plan deductions. The 401k deduction is also noted in box 12a and 13. We’ll discuss boxes 3-6 later, so scroll further down or just wait if you’re confused by those.

Now let’s look at the couple’s 1040 form. The $221,000 from box 1 of the W-2 is written into line 1 of the 1040. Their adjusted gross income is also $221,000 because we are assuming no other deductions. At this level of (M)AGI, neither the working spouse nor the non-working spouse can contribute to a Traditional IRA. 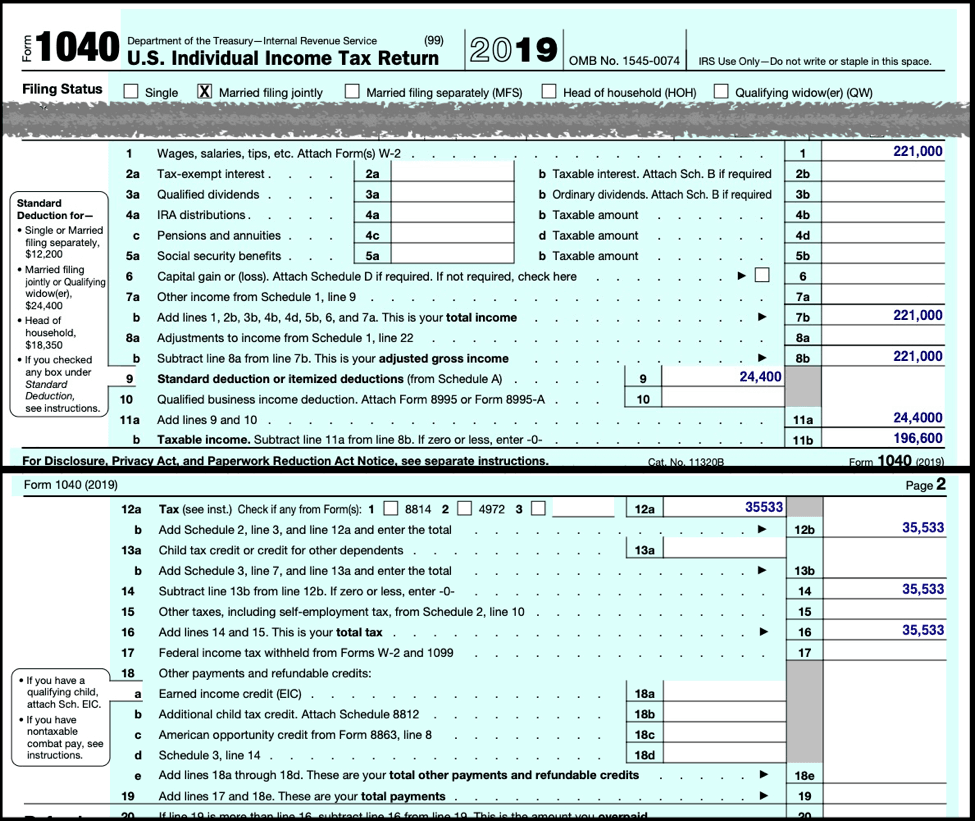 Next we see the standard deduction as the only reduction in income. This makes the taxable income $196,600, and results in an income tax liability of $35,533! Hopefully the withholding was enough in box 2 to cover most of this so our couple avoids a hefty penalty for under withholding this large tax bill.

Now let’s examine what happens when our fictional couple leverages a NQDCP. Let’s use most of the same assumptions, and make some adjustments and additions: 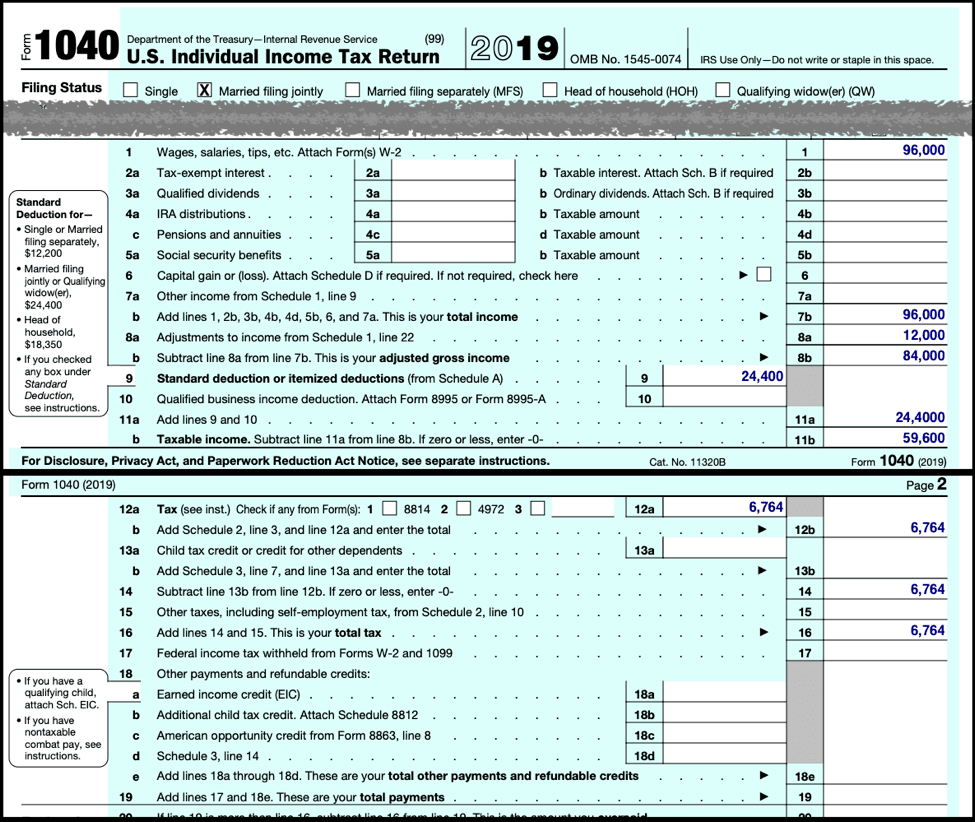 That’s a big win for the couple on the income tax equation, but those NQDCP contributions are still included in Box 3 and 5 of the W-2. Those lines are for wages subject to Social Security Insurance (SSI) and Medicare taxes, respectively. Unfortunately, I’m not aware of a way to completely avoid payroll taxes on earned income. Remember how I mentioned that is not significant, there is some great news here.

If you’re in a position to contribute to a NQDCP like our example couple here, your deferred compensation is likely over the SSI tax wage limit anyway, which was $132,900 in 2019. So while wages up to the limited are taxed at 6.2%, wages over have an effective SSI marginal rate of 0%!

The Medicare tax has no income limit, but that will only be taxed at 1.45% (or 2.35% for income exceeding the Additional Medicare Tax Rate thresholds set by the Affordable Care Act a few years ago). Medicare taxes will be relatively small anyway.

Since the deferred compensation is subject to payroll taxes when deferred, they will not be subject to them when received!

The IRS’s wording about paying the employee in the future is a key distinction from qualified plans like 401(k) and 403(b) plans that you are likely familiar with. Deductions into a qualified plan are made with actual salary received. Deductions into a NQDCP are not. The employee and employer are agreeing to defer today’s earnings until some point in the future. This is an important distinction. Your promise of future payment is not an asset in an account you own like a 401(k). It’s a liability on the employer’s balance sheet.

This means the ultimate payment of your deferred compensation is subject to risks from the employer’s financial mismanagement and bankruptcy. Your employer can structure the NQDCP to mitigate these risks for the participants, but it cannot entirely eliminate them and be compliant with the IRS’s regulations. Be warned, a black swan event could wipe you out.

Ideally this liability also has an associated asset on the company’s balance sheet, and this could be a positive risk. An employer’s NQDCP liability could be invested, potentially with you controlling the asset allocation of your deferred compensation, and subject to the risks and returns of the market. Then the ultimate payout of deferred compensation would be based on the total returns of those investments and not the original amount deferred.

How much you can defer can vary by employer, but my experience has been up to 100% of bonuses and up to 50% regular salary can be deferred.

Even better, NQDCPs are not subject to non-discrimination rules like qualified plans. Those are the rules that can prevent you from maxing out your 401(k) because not enough of your coworkers participate or contribute enough to the 401(k). To allow companies to offer NQDCPs to only a handful of employees, the regulation for NQDCPs simply excludes any non-discrimination rules. So defer as much as you like without worry of a non-discrimination test capping your deferrals.

But my employer doesn’t have a NQDCP…

Are you sure? Remember how I mentioned that I stumbled onto the NQDCP. I did not know my last employer had a NQDCP until I was promoted to a level where it was available. These things just don’t seem to be advertised to people who aren’t eligible. You have to ask if your company has one and what levels are eligible. If you’re making enough money to have this problem, you may not be that far off. Now may be time for a discussion with your boss about NQDCP eligibility.

What if your employer really doesn’t have a NQDCP already defined? You could simply ask for one, or find another employer that will give you one. The regulation’s intent was to provide saving opportunities beyond qualified plans to an exclusive group of highly compensated employees. Yet, the regulation doesn’t actually restrict these plans to those people. You don’t need a certain minimum income, you simply need a written agreement with the employer to defer compensation to have a NQDCP.

When do I actually get my deferred compensation?

The IRS requires you to start receiving deferred compensation at a predetermined date in the future or when you separate from the employer, whichever comes first. The duration of future distributions is between you and your employer. Large companies will generally have pre-defined options. I’ve seen a plan that allowed a lump sum distributions or quarterly payments for 5 or 10 years and another that allowed annual payments from 1 to 15 years. However, the IRS imposes requirements on NQDCPs for when an initial deferral decision can be made and how changes can be made. Existing plans will have these requirements covered for you.

A few exceptions to these distribution elections are available. The original deferral decision can be overridden by disability, death, or a change in the ownership or effective control of the employer. The IRS code also allows for deferred compensation to be paid upon the occurrence of an unforeseeable emergency, but only an amount that covers the emergency.

The IRS places some additional conditions on people that meet the definition of “specified” or “covered” employees, but this doesn’t limit the availability of a plan. For example a specified employee must wait 6 months after termination to receive a distribution instead of immediately after. Some plans may just make everyone wait the six months so they don’t have to maintain two records of plan participants. This can be a good thing. For example, pull the FIRE trigger with employer in July or later, so your first distribution arrives in the next tax year.

The tax benefits of these NQDCPs may be questionable for the normal people working until retirement age. Also, deferring all those taxes, switching employers (possibly with a higher salary), and receiving distributions from your previous employer’s NQDCP could be a recipe for much higher average and marginal taxes in the future! However, I think they make a lot of sense for the FIRE crowd! These can be important savings tools when you know you will retire early from your current employer. They can also provide a penalty free income source that bridges the time between FIRE and traditional retirement.

I deferred a significant amount of money in my employer’s NQDCP. This allowed me to deduct IRA contributions again, avoid thousands of dollars of income tax liability, invest more money because of the tax savings, and ultimately shorten the time for me to become FIRE’d. It was an important part of my FIRE plan, and it could part of yours too.