You Sunk My Retirement! Photo by Rick Bennett

“What?!  The IRS can take nearly 50% of my Retirement Fund in taxes?! How am I supposed to live on only half of my savings?  With taxes like this, how can I ever retire, let alone early?”

There is a dangerous nuance in the US Tax Code code that is going to sink and destroy your retirement! There is nothing you can do when the Tax Torpedo strikes, taking nearly half of your income with it!

The Tax Torpedo often strikes as people reach Age 70.5, when Required Minimum Distributions force withdrawals from 401ks and Traditional IRAs.  (Jim Collins has a great article with details on the RMD) It was in this context that I first became aware of the effect, when a reader suggested that if the Tax Torpedo resulted in higher taxes, then a Roth IRA was superior to a Traditional.  (You may recall I’m not a fan of the Roth)

Is this the case?  I had to investigate

The implementation of this effect is complex. The various explanations I found on the internet were either sensationalist drama, overly complex, or difficult to understand.  Hopefully this version is an improvement

The Tax Torpedo in Action

Remember how the US Tax Code works, from our IRS 101 example?

As a refresher, graphically it looks like this for a Married couple Filing Jointly (MFJ) using the Standard Deduction

Or even worse, what if it looked like this

Let’s use an example to make these graphs clear

In the Median Income case, what if you had $50k of income but need to withdraw $1k more from your IRA?  Looking at the first US 2014 Tax Curve, you would correctly estimate that $1000 would be taxed at 15%, increasing total tax due by $150

This is the Tax Torpedo in action.  Yeah, I’d be pissed too

How Social Security Income is Taxed

At low incomes, Social Security Income is completely tax free. But as income increases from other sources, such as from Dividends, Interest, Capital Gains, even Municipal Bond Interest, the tax free status is phased out

To determine how much of our SS is taxable, the IRS uses what they call Combined Income.  This is the sum of all income from other sources plus 50% of the annual Social Security Income

Why only 50%? During our working years, Social Security taxes are paid in equal amounts by the employee and employer.  When we receive Social Security income after retirement, half of the income is in effect a return of taxes paid and the other is income received from the employer contribution.

This is where it gets a little weird

This is easiest to understand in graphic form.  This graph uses the Median SS Income of $15228 per year.  You can estimate your own SS income here.

Will The Tax Torpedo Strike?

For an early retiree, the likelihood of having most of SS taxed is lower.  And if it does happen, SS Income is lower due to many years of not working.  Other income is also lower, as people Live Well for Less and choose Leisure over Labor.  And thanks to years of building a Roth Conversion Ladder before receiving SS, RMDs are lower.

But for somebody with high non-SS Income, those with large pensions, and if RMDs are large, then up to 85% of SS Income will be subject to taxation.  In this case, this income is added to Adjusted Gross Income

But let’s think about that in another way

If you withdraw $1000 from your Traditional IRA, what percentage of it is subject to taxation?  100%

If you earn interest on your savings account, what percentage of it is subject to taxation?  100%

If you are still working and saving for early retirement, what percentage of your income is subject to taxation?  100%

But in the worst case, only 85% of Social Security can be taxed.  That is like a 15% off sale, and you don’t even need a coupon.  I will take that deal any day of the week

What about a Roth IRA?


The argument goes:  Funds withdrawn from a Roth IRA are tax free, and thus are not added to Combined Income for determining how much of SS is subject to taxation.  Therefore, if we need an extra $1000 to spend, we can withdraw the funds from a Roth instead of a Traditional IRA with no impact.  But there is another type of investment account with the exact same characteristics:  a taxable brokerage account

When Combined Income is greater than the Upper Base, each additional $1 of non-SS income increases taxable income by $1.85 ($1 in income and $0.85 in SS)

But in practice, the taxable income is just added to Adjusted Gross Income.

The tax rate doesn’t change, the amount of income subject to taxation does

And… there is a very important distinction to point out

Subject to taxation is NOT the same as tax due.

100% of the Go Curry Cracker annual income is subject to taxation, yet we pay $0 in tax 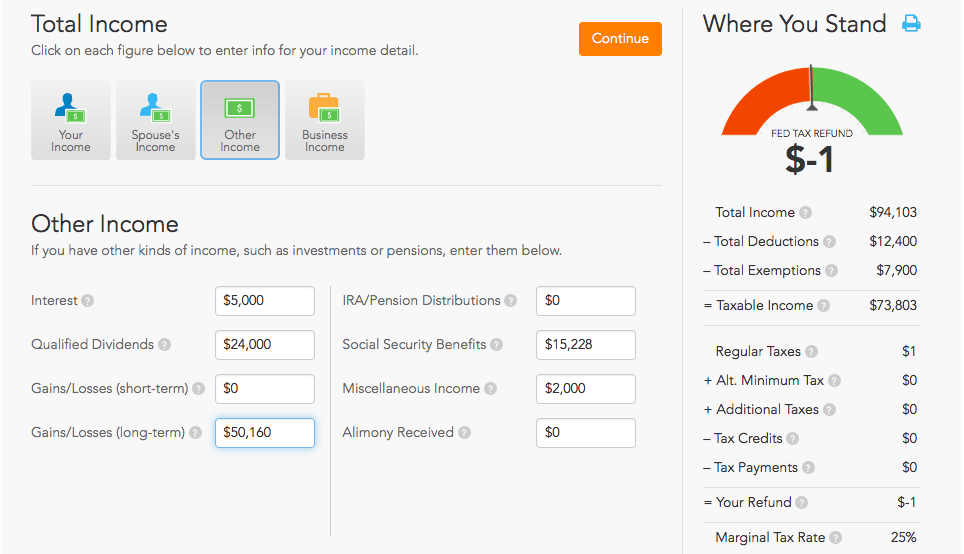 Despite the dangerous sounding name, the sensationalist articles about exploding marginal tax rates, and a whopping 85% of the SS income subject to taxation, we had $46k in income and the option to harvest another $50k, all without paying a single dollar in tax

It might be a torpedo, but it’s made by Nerf

This isn’t to say some people aren’t impacted.  SS recipients with Combined Income around the Lower and Upper Base levels may face tax bills larger than expected if they were assuming SS is tax free.

Reducing Combined Income below the Lower Base will eliminate any impact, particularly those portions taxed as ordinary income such as interest, short term capital gains, and Traditional IRA withdrawals.

This may not be possible for someone with a large pension and high social security income, or with large RMDs.  So let’s look at another example for somebody with all 3

That is an incredible tax rate on $100k of income, no matter how you look at it.

If you are someone you love is impacted by the Tax Torpedo, recognizing you paid less tax than if that income was from other sources might offer some small comfort.  Taxcaster can help you plan for your own unique situation

We won’t be able to receive SS  income for another 30 years or so.  By that time, I assume benefit levels will be reduced

One example: the Lower and Upper Base levels are not adjusted for inflation.  With 30 years of 3% inflation, that $32k Lower Base level will be equivalent to $12,800 in today’s dollars.  As a result, no matter what we do I can assume 85% (or more) of any SS income received will be taxable.  It’s income, after all, and the days of SS being tax free income are over

Because the SS Income is taxed as ordinary income, the size of Roth IRA conversion that can be done at zero or low tax rates is reduced or eliminated.  For this reason, we will delay SS income for as long as possible (Age 70 under current law:  See Jim Collins’ article for other considerations on when to start taking SS)

In the mean time, the 4 Principles to Never Pay Tax Again apply.  Even with Social Security income and the maximum amount subject to taxation, we can pay zero tax

See All of Your Accounts in One Place

Track your net worth, asset allocation, and portfolio performance with free financial tools from Personal Capital

What do you think? Did this help defuse the tax torpedo?

< Cash Flow Management in Early Retirement GCC vs The RMD >