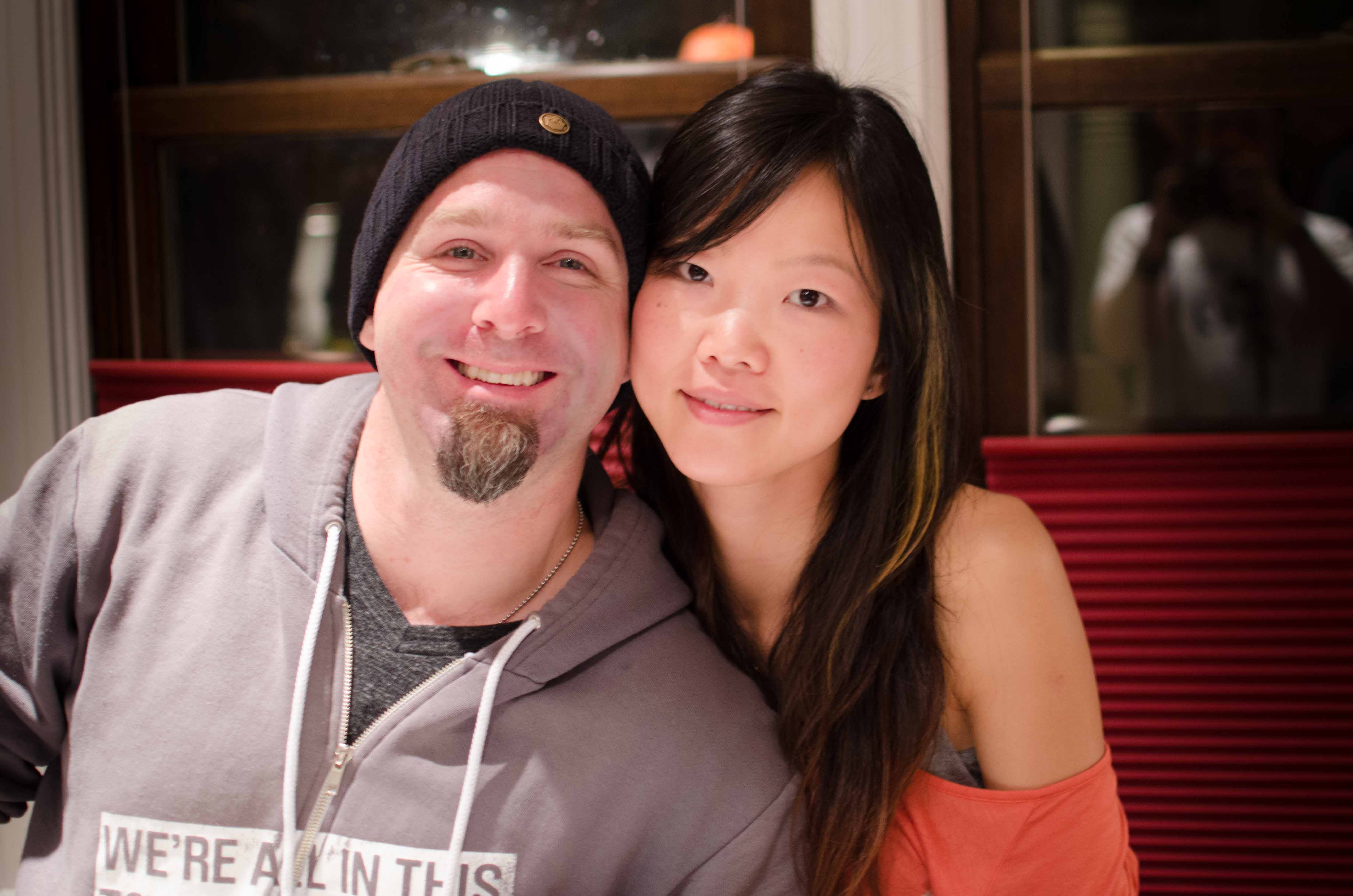 “This project in Taipei is really taking off, it would probably make a lot of sense for me to be based there rather than fly back and forth each month”

Over the past year, I had flown to Asia at least 10 times.  Business class flights are not cheap, and with hotels and meals included it would be far cheaper for the company for me to stay in Taipei

This was all very logical, how could they say no?

But my manager was having none of it

“Who is the girl?” he asked

Beijing winters are harsh and dirty, each breath a frozen intake of dirt and coal dust.  There are few places I would rather not be, but it is difficult to speak at a conference unless you are actually present

But wait, who is that?!  They invited fashion models?
(Winnie made me write that)

I worked my way across the room, stopping at the side of my good friend, Bill

Somehow (I have no idea how it happened) Winnie and I were seated next to each other at lunch. and she tried convincing me that we were eating dog (“Don’t you know, Chinese eat everything.”) Later that day I talked her into skipping a few hours of the conference to shop for a sweater.  I was freezing, honest.

I was definitely a bad influence.  But a few days later, back in our respective cities, Winnie had already forgotten who I was

From Day 1 as a homeowner in Seattle, I loathed my house.  That isn’t too strong of a statement

Everything about it was less than ideal.  For example, the neighbors would sometimes stop by to inform me that my grass was 31 mm tall, a clear violation of the maximum 30 mm stated in the neighborhood covenants

And the location.  How is it possible for a 4 lane super highway to have an effective max speed of 30 mph from 7 to 10 am?  Tired of the traffic, I tried taking the bus, a 90 minute slog of transfers and waiting

I even tried biking a few times, but the 11 mile ride nearly killed me so I gave up (years later I would do that ride in 30 minutes without breaking a sweat and hungry for more)

Nobody wanted this house, least of all me

I’m sure there are some great Real Estate agents in the world, but I have yet to meet one.  This one was less skilled than most, a one trick pony whose sole strategic move was, “Lower the price!”

But we’d already tried that with no measurable increase in potential buyers.  Instead of reducing the price further, I reduced my costs.  By firing the agent

Tired and hungry, I was about to head home from work when the phone rang

“Hi, Jeremy this is Bill.  I have the flu, would you be able to take some out of town guests to dinner?”

“You get some rest, Bill.  I have this covered”

The flu virus must have been working overtime, because the good Doctor was also too tired to make it to dinner.  Afterwards, I gave Winnie a short tour of the city.  A short tour of the city turned into a Saturday drive to the mountains, where Winnie saw snow for the first time.  A Saturday drive to the mountains turned into me flying to Chicago for the weekend, where Winnie would have meetings on Monday.  Me flying to Chicago led to Winnie changing her Chinese New Year destination from Florida to Seattle

An Angel Making an Angel

As the Immigration Officer that processed our marriage visa eloquently stated, using his fingers to make quote signs, “So… is that when your relationship ‘started?’ ”

I suppose it was.  And it continued with my monthly business trips to Taipei

For Sale by Owner

With a big For Sale by Owner sign in the front yard, I was ready to get this house sold

When I wasn’t working or on business trips, I painted the entire interior, installed two ceiling fans, fixed a small crack in the bedroom ceiling, replaced the hideous wallpaper in the master bath, trimmed the overgrown trees in the back yard, and installed 5 yards of fresh mulch in the landscaping.  Oh, and fixed the giant hole in the wall that my ex had left behind

I had a few interested parties, but nothing worked out

“Are you aware that a registered sex offender lives 2 miles from here?” asked one guy, as he withdrew his offer

“2 miles?  Why, that is practically just next door”

It was difficult juggling it all, so I considered once again hiring a professional.  One Realtor® recommended I raise the price (is there any other profession that calls themselves by a registered trade mark?) but otherwise offered nothing new

In one last ditch DIY effort, I paid $400 for a service to list the house in the MLS with a 3% fee to the buyer’s agent.

The asking price was $50,000 greater than I was asking 1 week before.  I had a full price offer by the end of the first day

I almost felt bad selling it to the couple that was designing a 1 hour commute into each of their lives (In the same direction, but “We can’t commute together because we work different hours.”)  But they were happy because they were buying the biggest house they could afford in a “good school district”

I must have been an interesting case in the eye of my employer.  Everybody around me was upgrading their kitchen, or buying a bigger house, or showing off their new Lexus or BMW.

I had just sold my house, rented a room in a stranger’s house, and started biking to work.  I couldn’t have been happier.  My housing costs had just plummeted, the 3 mile bike ride to work was quick and easy, and I was flush with cash for the first time in my life.

It was the perfect time to make a completely ridiculous request

“I think it would be fair to continue paying me my normal salary, and if my living in Taipei doesn’t work out… I’m very familiar with the flight options for the return to Seattle”

After a few discussions like this, my employer agreed.  I would move to Taipei.

I’m certain that my new freedom was a major factor.  It made business sense, certainly, but there was also the concern that if I didn’t move to Taipei with my current employer I might just find a new one

But nothing in the corporate world is simple or easy, every expat package had to be similar to avoid potential discrimination lawsuits

Instead of continuing to pay my US salary, they would give me a 10% “hardship allowance” and pay my rent.  Nice

Winnie and I moved in together, and were largely inseparable.

She had never cooked a day in her life, but after we read Your Money or Your Life

she ventured into the kitchen and discovered she loved it.  I learned how freeing it could be to live completely car free, and why Winnie had never had a driver’s license

Although I worked like a dog lest I be called back to the US, we took every opportunity to travel all over the region, going to Palau, the Philippines, Thailand, Bali, and to the beaches of Southern Taiwan.

My manager left the company to be CTO of a rapidly growing tech company.  I should have gone with him, I would easily have an extra $10+ million hidden under my mattress

But after evaluating all of the options, I chose the lesser of all evils and moved back to Seattle to take over his job

Things were complicated.  The only way Winnie and I could stay together was for her to move to Seattle, which meant marriage (we can’t have illegal aliens coming into the US, after all)

It was a scary topic for both of us, and we dealt with it by avoiding it for weeks.  Or months

I had a business trip to New York and Winnie and I spent the weekend in NYC.  On my 33rd birthday we were standing next to the bull statue on Wall Street, and at that moment thanks to a bull market and a portfolio of 100% stock, my net worth exceeded $1 million for the first time (albeit temporary.)  Happy Birthday to me!

I Want To Be a Millionaire, So Frickin Bad

Unless you were Winnie.  She had left her job, her friends, and her family, and was alone in a new city with a guy that worked too much and was terrified of marriage.  Fiercely independent, she was watching her savings dwindle because she refused to spend any of “Jeremy’s money”

After months of tension and avoidance, it all finally became too much.  She had reached her breaking point, “Fuck this guy!”

That evening, everything exploded.  In the only real argument we have ever had, months of anger and frustration came pouring out in a verbal onslaught.  Here was a woman I loved more than anything, and I was losing her because of my fear and embarrassment.

Did I say any of that?  Of course not.  I yelled back.  And then… I almost called her by my ex-wife’s name, which scared me more than all of the rest

A few moments later, Winnie walked out the door.

It would be 2 years before we would speak again

Winnie Tossing Me to the Curb

That was fun.  Thanks to a browser crash I was able to enjoy writing this story twice.  I hope if it twice as good the second time

It is now officially Winnie’s birthday, so I’ll be off the computer for the weekend.  Thanks for reading!

If you enjoyed this post, be sure to read the rest in the series:
Episode 1 – Clawing Out of Debt
Episode 2 – Lifestyle Inflation
Episode 3 – Paying Dues
Episode 4 – A Tale of Two CitiesEpisode 5 – The Final Chapter