The SECURE Act – Compression of the Stretch IRA 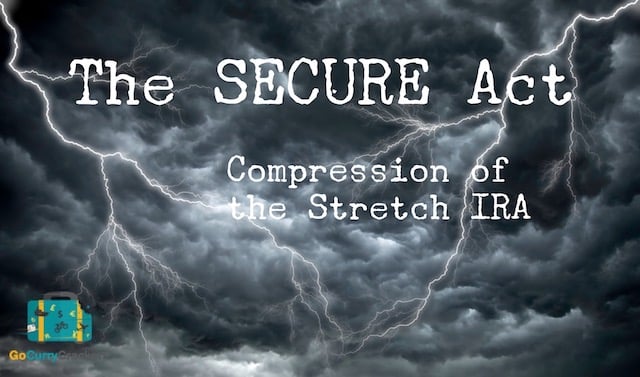 After 10 years or so of “this legislation will pass soon”, at the end of 2019 the Setting Every Community Up for Retirement Enhancement Act finally became law.

Besides a cool acronym, the SECURE Act offers a wide range of changes and “enhancements” to 401(k)s, IRAs, and 529s, as well as a whole slew of incentives for small businesses to add or expand retirement plans to both full and part-time workers.

In my opinion, most of the changes (including the much-touted compression of the stretch IRA) are of limited interested (to the living.)

Compression of the Stretch IRA

The biggest change from the SECURE Act is definitely the elimination of the so-called Stretch IRA, which allowed our children and grandchildren to slowly distribute an inherited IRA over their own lifetimes [exciting details(!) – and reader commentary ;) – in the post, Multi-Generational Tax Minimization.]

Now, rather than slowly drawing down an inherited IRA over an entire generation or two, it must be done in 10 years.

The legislators refer to this change as “revenue enhancing”, better known as a Tax Increase.

Naturally, any time there is a potential tax increase the rhetoric becomes a little saucy:

“This is the new Death Tax – Death of the Stretch IRA!” (ooh, scary)

“The difference is instead of your kids having $2 million, your kids will be broke because the income tax acceleration reduces the IRA so much.” (You don’t want no drama. No, no drama.)

“I haven’t done the math yet… but, the ominous tax code of the future is here… seems like America is becoming a Pitchfork Democracy. A Banana Republic and a Greek economy are the likely outcomes!”

No quadratic equations were harmed in the writing of this blog post.

When I explored the Stretch IRA, I posed a hypothetical situation:

I earmark $200k of my Traditional IRA for Jr’s inheritance upon birth. This grows to $1 million by my 70 1/2 birthday, based on a 7% real cagr, and I start to take RMDs. Even so, the IRA grows to $1.3 million before I leave the mortal plane,

Jr then begins taking (smaller) RMDs based on his own life expectancy and the IRA continues to grow towards untold riches.

Now, with a 10-year timeline, much larger withdrawals drive the IRA value towards zero.

Technically there is no specific requirement for withdrawals other than the IRA be completely vacated within 10 years. I chose to model this as 10 equal withdrawals (using annuity math for a $1.3 million IRA growing at 7% = $172,982.01.)

That’s just one year though. We need to look at the withdrawals and taxes over a lifetime.

Now to compare we can look at the net present value of this entire series of tax payments (to age 100):

But wait! There is more!

Upon withdrawal the after-tax dollars are invested in a taxable brokerage account. If this generates an annual 2% dividend taxed at 15% (current tax law) that places an additional load on the portfolio of 0.3% annually (2% * 15% = 0.3%.)

We can also calculate the net present value of a lifetime of dividend tax payments:

Caveat: this is likely overstated as the tax rate on dividends will be 0% if total income is less than ~$100k, as it most likely will be once the inherited IRA is depleted.

The combination of these 2 tax loads is our total tax burden:

And the value of the brokerage account after all of this tax has been paid?

Now that we have a methodology, we can compare other scenarios – maybe Jr has a job/other income, which will result in higher taxes on IRA withdrawals.

Should We Make Changes to Our Tax-Minimization Plan?

Tax-minimization is largely a game of deferral and marginal rate minimization. Delay paying as long as possible, and then pay as little as possible.

When forced to make large withdrawals in the short term (e.g. within 10 years) we lose a lot of flexibility. The only option to pay less is to have a smaller Inherited IRA.

The following chart shows the marginal tax rate paid on each of the 10 equivalent withdrawals outlined above. If the IRA value approximately doubled (or for Single filers), we would start to fall into the 24% tax bracket. If it dropped to ~$750k, we would stop at the upper edge of the 12% bracket (~$100k/year “RMD”.)

Extrapolating for cases with other income is left “as an exercise for the reader.”

To bequeath a smaller IRA, we could spread the love a little more – leave less money to more people.

Another option is to aggressively Roth convert until the to-be-inherited IRA is <$750k (inflation-adjusted). “Pay 12% now to avoid Jr paying 22% later.”

Which, it turns out, was already the plan.

Does it make sense for somebody in the accumulation phase to avoid making Traditional IRA contributions to reduce tax burden after we are dead for people who may not even be born yet?

Probably not. Unless that is your thing. [no judgement ;) ]

If current incomes are taxed at 22%+, saving through Traditional IRA and 401k continue to be the solid choice. If income and taxes are less than that, and early retirement isn’t a goal, then Roth options are more mathematically sound.

The other changes in the SECURE Act are less interesting. In roughly the reverse order of interest:

Prior to the SECURE Act a very small percentage of 401(k)s offered an annuity option within the plan. Supposedly a big reason more didn’t was lawyers were worried if they picked an insurance company (aka an annuity sales company) that made poor investments and failed as a result, that they (the 401k provider) could be sued.

By offering legal protection from such a thing, in theory more 401k plans will offer annuities.

Why you would want an annuity in your 401k is beyond me, but the insurance companies seem to be big fans (as exemplified by the lobbying dollars spent.)

Had it been an option, I would NOT have made this withdrawal when Jr was born. That $5,000 would be better allocated towards a Roth conversion.

Increase in Age for Required Beginning Date for Mandatory Distributions

The RMD Age is now 72, meaning the first mandatory withdrawal from Traditional retirement accounts is delayed by 1.5 years or so.

But without a corresponding change to the life expectancy tables, this isn’t very exciting – it doesn’t fundamentally change what 401k/IRA values will push us into higher tax brackets – See: Is Your 401k Too Big?

At best we might get one extra year of Roth conversion in before the RMD begins, but one year does not a tax-minimization strategy make.

Congress Just Passed the Biggest Retirement Bill in More Than a Decade. Here’s What You Need to Know

If you have reviewed the SECURE Act, feel free to link to it in the comments.

Although touted as massive change I’m not really moved. I guess it takes more for me to (prematurely) roll over in my grave.

By requiring inherited IRAs to be drawn down in 10 years rather than 50, 60, 80 years, more of the IRA will be taxed sooner and at higher rates. In addition, the loss of tax-deferral on the withdrawn funds will (probably) cause more tax to be paid on dividends. Inherited IRAs in excess of ~$750k for married filers will see marginal rates of 22%+.

Yes, it is a tax increase. No, it probably won’t cause societal collapse. Continuing along as before is most likely the best choice.

Are you feeling more SECURE?